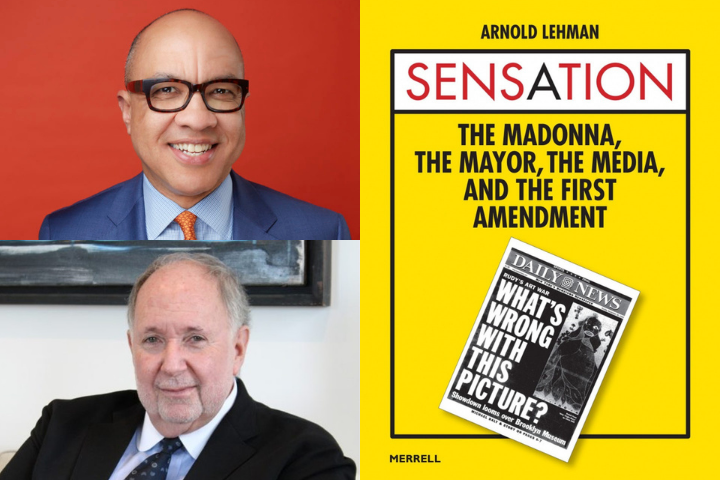 Join Arnold Lehman, former director of the Brooklyn Museum, and Darren Walker, president of the Ford Foundation, for a timely conversation about Lehman’s long-awaited book Sensation: The Madonna, the Mayor, the Media, and the First Amendment (2021). The book presents Lehman’s personal account of the controversy, which took place during his time as director and surrounded the lightning-rod exhibition Sensation: Young British Artists from the Saatchi Collection (1999–2000). It details the Museum’s bitter fight with New York Mayor Rudy Giuliani and others. Artist Chuck Close said of the book, “Looking back at one of the most important contemporary exhibitions ever, Lehman’s book is filled with the excitement and anxiety of the moment. I know, I was there.”

Two decades later, in a time of reckoning for institutions and as controversies increasingly shape the art and museum fields, the Sensation exhibition takes on new resonance.

During this conversation, Walker and Lehman will discuss how this critical case study in First Amendment rights changed how we think about the issues of freedom of speech and artistic expression that continue to be debated today. This event will take place in person at the Brooklyn Museum, but will also be broadcasted online via a YouTube livestream.

Tickets are $16 and include after-hours admission to The Slipstream: Reflection, Resilience, and Resistance in the Art of Our Time.

This program will include ASL interpretation. For access needs, please email [email protected].

This program is presented in collaboration with the Brooklyn Museum.

Arnold Lehman served as the director of the Brooklyn Museum from 1997 to 2015. He reshaped the institution in many ways during his tenure, from prioritizing community access to introducing a diverse array of exhibits. During his time at the helm, Lehman emphasized feminist art, populist art, and art by local artists; doubled the museum’s endowment; and oversaw a demographic shift to a significantly younger, more diverse crowd of visitors. Prior to his role at the Brooklyn Museum, he served as the director at the Baltimore Museum of Art for nearly two decades. Following his retirement from the Brooklyn Museum in 2015, Lehman joined Phillips, a leading auction house, as a senior advisor to its chairman and CEO, Edward Dolman.

Darren Walker is the president of the Ford Foundation, an international social justice philanthropy. He is a member of the Reimagining New York Commission and the co-chair of NYC Census 2020. Prior to joining the Ford Foundation, Walker was vice president at The Rockefeller Foundation, overseeing global and domestic programs. Walker serves on a number of boards, including Lincoln Center for the Performing Arts, the National Gallery of Art, Carnegie Hall, the High Line, the Committee to Protect Journalists, and the Smithsonian National Museum of African American History and Culture. Walker has been named on many leadership lists, including TIME’s annual 100 Most Influential People, Rolling Stone’s 25 People Shaping the Future, Fast Company’s Most Creative People in Business, Ebony’s Power 100, and Out magazine’s Power 50.

Together w/@PENAmerica & the Coalition Against Online Violence, we're calling on @Twitter to #FightOnlineAbuseNow by building an SOS switch.
https://bit.ly/3zJxCaU

In Burma a pandemic rages as a media crackdown has left its public in the dark. What happens now and what's next? Find out at our virtual event on September 29. Register here➡️http://bit.ly/3BQSU7l
#RFA25
#WhatsHappeningInMyanmar