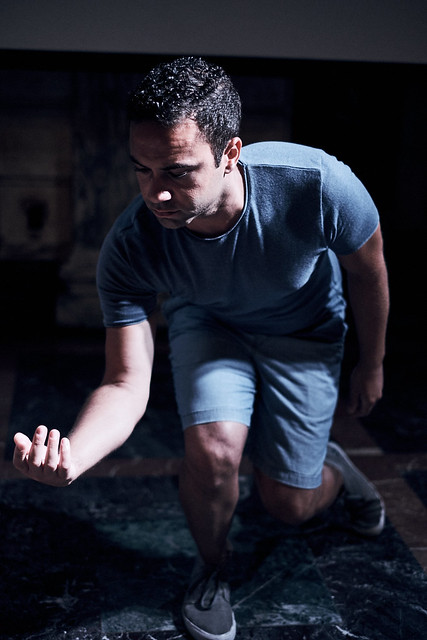 Dr. Joshua Bennett is an assistant professor of English and Creative Writing at Dartmouth College. He is the author of The Sobbing School (Penguin, 2016)—which was a National Poetry Series selection and a finalist for an NAACP Image Award—as well as Being Property Once Myself: Blackness and the End of Man, which is forthcoming from Harvard University Press. Bennett holds a Ph.D. in English from Princeton University, and an M.A. in Theatre and Performance Studies from the University of Warwick, where he was a Marshall Scholar. Bennett has received fellowships from the National Endowment for the Arts, the Massachusetts Institute of Technology, the Ford Foundation, and the Society of Fellows at Harvard University. He is the founder and director of the June Jordan Fellowship: an organization dedicated to creating art-making opportunities for young people both inside and outside of the nation’s jails, prisons, and detention centers. Bennett’s writing has been published in The New York Times, The Paris Review, Poetry, and elsewhere. Penguin Books will publish his second collection of poems, Owed, in 2020.

Ammayeah Benton is a published poet and aspiring novelist from New York City. She is her own greatest motivator, and loves to inspire people, including herself. She is a spoken word artist performing at venues such as NYU, Molasses Books, Fortnight Institute, and Greenkill Arts Center. She is involved in the Lives in Transition writing group, performing throughout New York. Ammayeah also creates visual poems with her word collages, which can be viewed on her Instagram: @Ammayeh1. She currently is accruing wealth and writing more dynamic pieces reflecting her journey. Her inspirations include her life, flowers, Nikki Giovanni, Audre Lorde, walking meditations, good food, gratitude, and The Last Poets. She is looking forward to performing in more spaces, finishing her novel, and making a small paperback of word collages.

Sergio De La Pava is the author of three novels: A Naked Singularity, Personae, and Lost Empress. He is also a lifelong public defender and legal director at New York County Defender Services in Manhattan where he represents indigent people accused of crimes and advocates for large-scale criminal justice reform. He has taught at Seton Hall Law School and lectured and written on criminal justice issues for The Guardian, MoMA PS1, Harvard Law, Public Radio International, UK Sky News, New York Daily News, and other venues.

Dr. Baz Dreisinger, a professor at John Jay College of Criminal Justice, works at the intersection of race, crime, culture, and justice. She is the founding academic director of John Jay’s Prison-to-College Pipeline program, which offers college courses and reentry planning to incarcerated men and works to increase access to higher education for justice-involved individuals; was named a 2017-2018 Global Fulbright Scholar for her work promoting education and restorative justice internationally; and is the executive director of the Incarceration Nations Network (INN), a global network and think tank that supports, instigates, and popularizes innovative prison reform efforts around the world. Dr. Dreisinger’s book Incarceration Nations: A Journey to Justice in Prisons Around the World was heralded by the New York Times, NPR, and many more, and was named a notable book of 2016 by the Washington Post. Professor Dreisinger moonlights as a journalist and critic, writing about Caribbean culture, race-related issues, travel, music, and pop culture for such outlets as the New York Times and Wall Street Journal, and producing on-air segments about music and global culture for National Public Radio (NPR).

Brendan Kiely is The New York Times best-selling author of All American Boys (with Jason Reynolds), The Last True Love Story, and The Gospel of Winter. His work has been published in ten languages, received a Coretta Scott King Author Honor Award, the Walter Dean Myers Award, the Amelia Elizabeth Walden Award, and was selected as one of the American Library Association’s Top Ten Best Fiction for Young Adults. Originally from the Boston area, he now lives with his wife in Greenwich Village.

Ian Manuel is a poet, activist, and recent MacDowell Fellow. Ian’s poetry was featured in Bryan Stevenson’s bestseller, Just Mercy. In 1990, Ian was living in Tampa in one of the poorest, most violent housing projects in the state. At 13, he was involved in a shooting which left him one of the youngest prisoners condemned to die in prison in the United States. He was so young that he was put in solitary confinement, where he remained for the next 18 years. Ten years ago, Equal Justice Initiative took on Ian’s case as part of their fight to end excessive punishment of children, hoping to ban life without parole for children who were convicted on non-homicides. Ian was released after 26 years in prison. Since his release he has spoken at NYU, Butler University, Florida State University, The School of Visual Arts, Horace Mann, and many more prestigious colleges and organizations. He is living in Brooklyn, and writing an innovative memoir that will make you believe in his mantra: The impossible is obtainable.

Caits Meissner is PEN America’s Prison and Justice Writing Program manager. Before joining PEN, Caits developed community arts programs for organizations such as Tribeca Film Institute, The Bronx Academy of Letters, Urban Arts Partnership, The Facing History School, and The Lower Eastside Girls Club. She has taught and co-created extensively for over 15 years with a wide spectrum of communities including prisons, public schools, and college classrooms at The New School University, City College of New York, and John Jay College of Criminal Justice. In 2017, Meissner re-envisioned the concept of book tour for her illustrated poetry collection Let It Die Hungry (The Operating System, 2016), pairing public speaking engagements with opportunities to work with incarcerated writers across the United States.

Robert Pollock is an advocate of criminal justice reform and its intersection with the arts. He is an ongoing participant in Rehabilitation Through the Arts, Musicambia, Refoundry, and a teaching artist with Carnegie Hall’s Musical Connections program. He has collaborated with the Fortune Society, Osborne Association, and several New York colleges to discuss the role of the arts in prison education and rehabilitation. As a visual artist, he illustrated the picture book for children of incarcerated parents, Sing Sing Midnight, which is used in therapeutic settings around the country. As a singer-songwriter, his compositions have been heard at the Obama White House, the RFK Human Rights Foundation, Create Justice forums, the New York Ethical Society, and the main stage at Carnegie Hall. Robert is currently the Prison Writing coordinator at PEN America and the creative director of the lifestyle arts group Spoke and Feather.

Jackie Wang is a student of the dream state, black studies scholar, prison abolitionist, poet, filmmaker, performer, trauma monster, and Ph.D. candidate at Harvard University in African and African American Studies. She is the author of Carceral Capitalism (Semiotexte/MIT Press), a number of punk zines including On Being Hard Femme, and a collection of dream poems titled Tiny Spelunker of the Oneiro-Womb (Capricious). In her most recent work she has been researching the bail bonds industry and the history of risk assessment in criminal justice. Find her @LoneberryWang and loneberry.tumblr.com.

In the 20+ years that Rehabilitation Through The Arts (RTA) has operated theatre, dance, writing, visual arts, and music programs in New York State prisons, hundreds of its participants have been released, mostly to the Metro New York area. In response to the many RTA alumni who want to continue the creative journey they began in prison, RTA launched a community program, guided by an Alumni Advisory Committee. Our first activity was an acting workshop open to RTA alumni and their families; we are delighted that our first performance, directed by Morgan Auld, will be staged at this PEN America event.

Dances For Solidarity (DFS) is a movement-based project directed by choreographer Sarah Dahnke. It began as a letter writing campaign between artists and activists in New York and incarcerated people in Texas and Louisiana. Each letter initiated with the same 10-step Dance for Solidarity as a means to initiate a conversation around movement. Since 2015, the project has created dances in collaboration with approximately 200 incarcerated people, many of whom choreograph from within a 9′ x 11′ solitary confinement cell. Dahnke brings together dancers on the outside who then bring life to this movement in live performance. Incarcerated choreographers with Dances for Solidarity are able to send a piece of themselves to the outside world through their dance work and are able to identify as choreographers, artists, and creators with the ability to create change in the narrative around how society views those who are in prison.

Through Carnegie Hall’s Musical Connections program, men at Sing Sing Correctional Facility create and perform music with visiting artists. A series of workshops focuses on developing composition and instrumental skills, while several concerts for the facility’s general population feature original works written and performed by the artistic community. After returning home to New York City, men meet regularly to support each other, inform the program as an advisory committee, and continue to make music.

Musicambia brings music learning and ensemble performance to prisons throughout the United States. Through working closely with incarcerated individuals on performance, music theory, ear training, and composition, our professional musicians build artistic communities that nurture the humanity of all involved. Musicambia uses the power of music to build supportive communities where incarcerated individuals can build human connections, engage in learning, and rebuild their lives. Through performance and creation, participants develop self-confidence, positive self-image, and communication skills. By sharing their skills, musicians grow as teachers and citizens committed to humanizing our justice system. Musicambia’s flagship program at Sing Sing Correctional Facility is entering its fifth season. www.musicambia.org