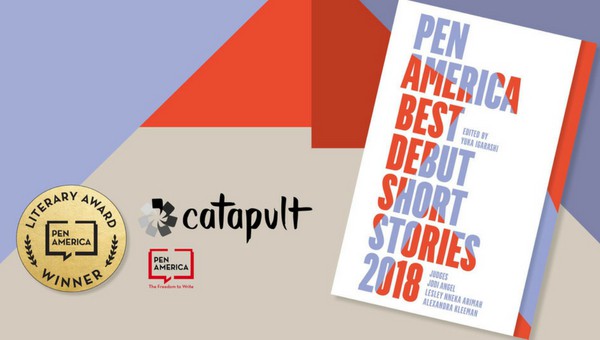 PEN America and Catapult celebrate the publication of PEN America Best Debut Short Stories 2018, an anthology of fiction by the recipients of the 2018 PEN/Robert J. Dau Short Story Prize for Emerging Writers, judged this year by Jodi Angel, Lesley Nneka Arimah, and Alexandra Kleeman. Copies of the anthology will be sold to benefit Housing Works.

PEN America Best Debut Short Stories 2018 celebrates 12 outstanding stories by today’s most promising new fiction writers and the literary magazines that discovered them. The characters within these pages include a college dropout dressed up as Hercules at Disney World; a college graduate playing a prostitute in a ghost town in Montana; a father from Trinidad leading a double life on a temporary visa; and a housewife in Taipei perfectly performing her familial and marital duties while harboring secret desires.

Join us on Monday, September 24 at 7:00pm at the Housing Works Bookstore Cafe for this free event.

Cristina Fries is an MA student in creative writing at the University of California, Davis. “New Years in La Calera” is her first published story.

Lin King grew up in Taipei and currently does most of her writing on the New York subway. A project assistant at the studio of artist Cai Guo-Qiang, she graduated last year from Princeton University after completing her thesis collection, The Happiest Typhoon Day: Stories.

Celeste Mohammed is a lawyer, emerging writer, and mother of a two-year-old. She holds an MFA in creative writing from Lesley University and lives on the Caribbean island of Trinidad.

Grayson Morley is a graduate of the fiction program at the Iowa Writers’ Workshop and Bard College. He is originally from Canandaigua, New York. He is currently at work on an absurdist novel about UPS efficiency tracking software. He tweets at @eightysevenkeys, which was his AIM handle back in the day.

Maud Streep is from Nyack, New York, and lives in Brooklyn. She holds an MFA from the University of Montana. Her writing has been supported by scholarships and fellowships from the Bread Loaf Writers’ Conference, Lighthouse Works, and VCCA. She is a 2017 NYC Emerging Writers Fellow at the Center for Fiction.

Ava Tomasula y Garcia is a 23-year-old from northern Indiana. She is invested in fights for a redistributive, equitable, and sustainable economy and justice for low-wage and migrant workers. Ava also makes animations, and is now living in Mexico City. She’s trying to live up to and in Ella Baker’s words, “We who believe in freedom cannot rest.” She wants you to act, now!

Megan Tucker is an associate editor of The Common, and a graduate of Wellesley College and the University of Michigan.

In @article19org and @pressfreedom's latest briefing, interviews and recommendations examine the different manifestations and severe impact of online harassment and abuse faced by women journalists from the Iranian diaspora. https://bit.ly/3aTnrpN