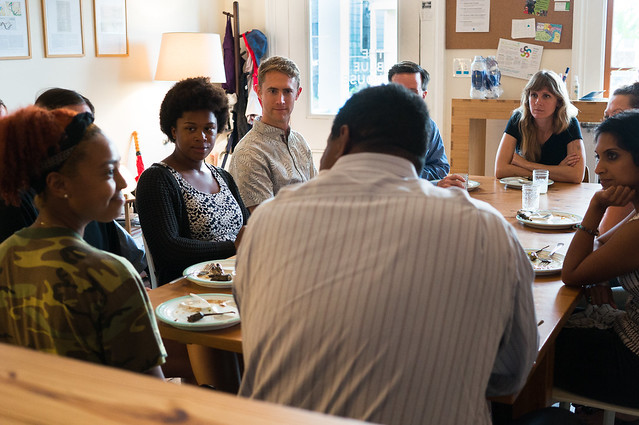 PEN America supported a mixed media collaboration between The Blue House and The New Orleans Advocate that aimed to reduce the paper’s vulnerability to the changing media landscape via a participatory journalism process including dinner, dialogue, and artistic process to reframe the way people interact with mainstream media.

Artists working on the projects were Carl Joe Williams, Anne Nelson, Ryn Wilson, and Ashley Teamer. This project sought to diversify the range of voices typically represented in mainstream media by elevating disadvantaged voices in conversation with institutional power and engaged in critical civic issues with traditional media outlets to retain readers, grow revenues, and provide high quality journalism by adapting to new media interfaces. Blue House NOLA hosted two workshops engaging in the collaborative process focusing on the court system and water infrastructure. The workshops brought together journalists, artists, and topic experts, including affected residents and individuals who work in the water management or court system to listen and learn from exchanges from diverse vantage points. All participants brainstormed how to explore these topics through art to broaden civic engagement.

This event was made possible through a grant from PEN America’s Press Freedom Incentive Fund, which supports projects that underscore the vitality of journalism through the impact it has on a range of local issues.