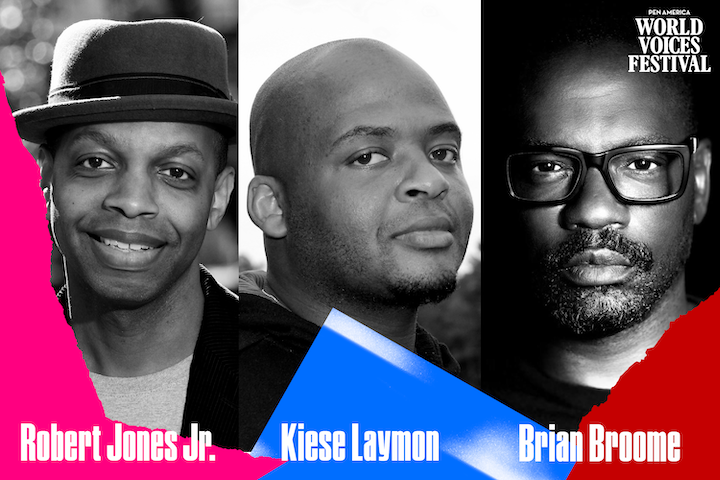 Kiese Laymon, Robert Jones Jr., and Brian Broome come together as writers, readers, and literary citizens to explore Black love and performances of Black masculinity—both its manifestations in the body and mind.

Laymon’s satirical first novel, Long Division (soon to be re-released), travels time to depict the journeys of two Black teenagers coming of age under the shadow of history in Mississippi, as the author “cleverly interweaves his narrative threads and connects characters in surprising and seemingly impossible ways” (Kirkus Reviews). Robert Jones Jr.’s The Prophets breathes life into new dimensions of Black history with a queer love story between men in the antebellum South. Reviewing the book in The New York Times, poet Danez Smith called it a “lyrical and rebellious love story embedded within a tender call-out to Black readers, reaching across time and form to shake something old, mighty in the blood.” In his “magnificent and harrowing” (Publishers Weekly) debut memoir, Punch Me Up to the Gods, Brian Broome evokes both the necessity and the toll of self-preservation growing up as a dark-skinned queer boy in America’s heartland.

In their explorations of queerness, vulnerability, and tenderness, these three artists chart the path to what Laymon has called “Black abundance”—not a destination but a process of becoming, of astounding society’s low expectations for Black men and women with unimpeachable excellence.

This digital event will start at 4pm ET / 1pm PT. If you have any questions, please visit our FAQs.

Presented in collaboration with Word Up Community Bookshop.

Born and raised in Jackson, MS, Kiese Laymon, Ottilie Schillig Professor in English and Creative Writing at the University of Mississippi, is the author of the novel Long Division, the memoir Heavy, and the essay collection How to Slowly Kill Yourself and Others in America.

Robert Jones Jr. is a writer from New York City. He received his BFA in creative writing and MFA in fiction from Brooklyn College. He has written for numerous publications, including The New York Times, Essence, and The Paris Review. He is the creator and curator of the social justice and social media community Son of Baldwin, which has over 275,000 members across platforms. The Prophets is his debut novel.

Brian Broome, a poet and screenwriter, is a K. Leroy Irvis Fellow and instructor in the writing program at the University of Pittsburgh. He has been a finalist in The Moth’s storytelling competition and won the grand prize in Carnegie Mellon University’s Martin Luther King Jr. Writing Awards. He also won a Robert L. Vann Media Award from the Pittsburgh Black Media Federation for journalism in 2019. He lives in Pittsburgh with a cat.

About Word Up Community Bookshop

Word Up is a multilingual, general-interest community bookshop and arts space in Washington Heights, New York City, committed to preserving and building a neighborhood in which all residents help each other to live better informed and more expressive lives, using books as an instrument of reciprocal education and exchange, empowering not only themselves, but their community. Word Up is run by volunteers from the uptown community. By hosting readings, concerts, screenings, art exhibitions, talks and workshops, community meetings, and other activities for kids and adults, they support and fortify the creative spirit unique to their diverse, uptown community.

Word Up is a program of the 501(c)(3) nonprofit organization Seven Stories Institute, whose mission is to provide necessary books to communities that do not otherwise have access to them and to stimulate discussion of important policy issues within those communities who have the most to lose in the current political and economic crises but have the least access to the terms of the debate.