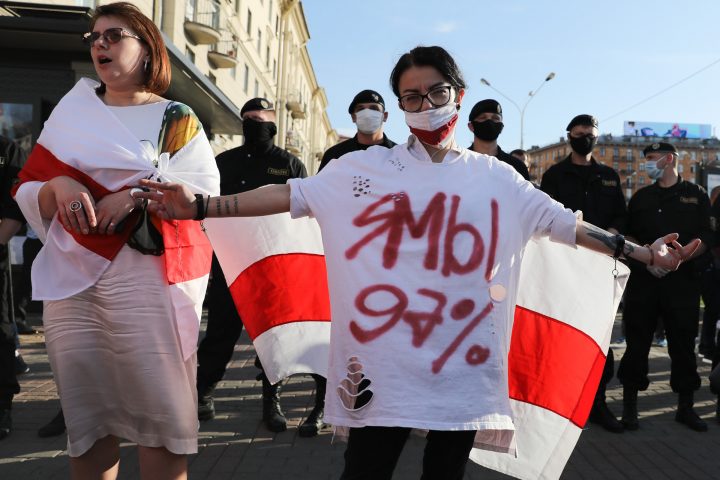 On July 15, PEN America, PEN Belarus, and Free Russia Foundation will host a discussion on the ongoing political crackdowns in Belarus leading up to the country’s August 9, 2020 presidential election. In addition to exploring the recent wide-scale attacks on political opposition and the press, the conversation will examine broader trends of suppression of freedom of expression and the public’s right to information in Belarus, along with President Lukashenka’s relationship with the Kremlin.

The live Webex session, which will take place on Wednesday, July 15 at 10am ET, will include an extensive Q&A session. You may submit your questions in advance at registration or during the session. In order to attend, please register before the event.

On June 19, Belarusian authorities arrested hundreds of opposition supporters who had lined the streets of Minsk to support petitions for opposition leader campaigns in the upcoming election. Many of those arrested were journalists and other members of the media. Among those who remain imprisoned since June 19 is prominent opposition leader Viktar Babaryka—the prime opposition candidate in the upcoming presidential election. President Lukashenka has so far ignored requests for Babaryka’s release.

Featured speakers will include Taciana Niadbaj, a poet, translator, and current executive director of PEN Belarus; Franak Viacorka, a Belarusian journalist and media expert; Natalia Arno, president of Free Russia Foundation; and Polina Sadovskaya, Eurasia program director at PEN America. The event will be moderated by Michael Weiss, senior editor for The Daily Beast and a frequent national security analyst and contributor for CNN.

The PEN Pod: On Myths, Magic, and Intergenerational Narratives with K-Ming Chang

In Sprint to Election Day, PEN America Fights Back Against Disinformation with What to Expect When You’re Electing

NEW: Just weeks before he was set to be freed, Russian historian Yury Dmitriev was re-sentenced for an additional 13 years on politically-motivated charges. Our statement. https://bit.ly/30hv0BF