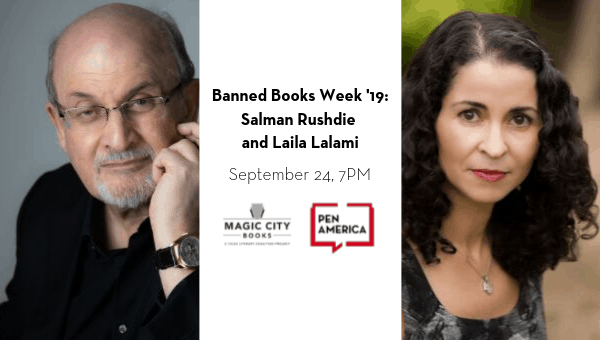 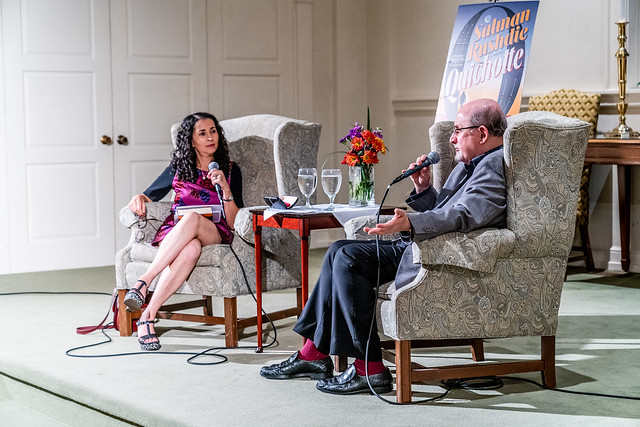 Salman Rushdie returned to Tulsa for a celebration of his new novel, Quichotte, a dazzling Don Quixote for the modern age—a tour de force that is as much an homage to an immortal work of literature as it is to the quest for love and family. PEN America, alongside Magic City Books, commemorated this release right in time for Banned Books Week!

Rushdie, a former president of PEN America, was joined in conversation by Pulitzer Prize finalist and PEN America Member Laila Lalami whose most recent and timely novel, The Other Americans, is at once a family saga, a murder mystery, and a love story, all informed by the treacherous fault lines of American culture. The event discussed the literary interpretation of a classic and the accompanying satirical commentary on our modern age of alternative facts.

Salman Rushdie is the author of thirteen previous novels—Grimus, Midnight’s Children (for which he won the Booker Prize and the Best of the Booker), Shame, The Satanic Verses, Haroun and the Sea of Stories, The Moor’s Last Sigh, The Ground Beneath Her Feet, Fury, Shalimar the Clown, The Enchantress of Florence, Luka and the Fire of Life, Two Years Eight Months and Twenty-Eight Nights, and The Golden House—and one collection of short stories: East, West. He has also published four works of nonfiction—Joseph Anton, The Jaguar Smile, Imaginary Homelands, and Step Across This Line—and coedited two anthologies, Mirrorwork and Best American Short Stories 2008. He is a member of the American Academy of Arts and Letters and a Distinguished Writer in Residence at New York University. A former president of PEN America, Rushdie was knighted in 2007 for services to literature.

was born in Rabat and educated in Morocco, Great Britain, and the United States. She is the author of the novels Hope and Other Dangerous Pursuits, which was a finalist for the Oregon Book Award; Secret Son, which was on the Orange Prize longlist; and The Moor’s Account, which won the American Book Award, the Arab American Book Award, and the Hurston/Wright Legacy Award. It was on the Man Booker Prize longlist and was a finalist for the Pulitzer Prize. Her essays and opinion pieces have appeared in the Los Angeles Times, the Washington Post, The Nation, Harper’s, the Guardian, and the New York Times. The recipient of a British Council Fellowship, a Fulbright Fellowship, and a Guggenheim Fellowship, she is currently a professor of creative writing at the University of California at Riverside. Her new novel, The Other Americans, was published by Pantheon in March 2019.