Authoring Advocacy: Writing and activism in an era of mass incarceration with Donna Hylton and Piper Kerman 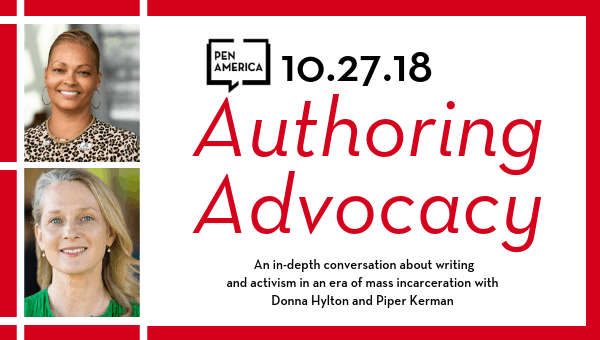 Join PEN America in welcoming the inaugural 2018 Writing For Justice Fellows at Authoring Advocacy: a conversation about writing and activism in an era of mass incarceration between Donna Hylton and Piper Kerman, two prominent activists and memoirists who boldly reflect on their own experience in— and America’s experience of— our system of mass incarceration. Stay after for a meet and greet with the Fellows!

Unfortunately, due to unforeseen circumstances, our original presenters, Rachel Kushner and Theresa Martinez, will no longer be able to join us. We are so happy to welcome our Writing For Justice advisory committee member Piper Kerman, and friend of our program Donna Hylton to our stage.

Donna Hylton is a women’s rights activist, criminal justice reform advocate, and Senior Justice Fellow at Katal Center for Health, Equity and Justice. Donna speaks publicly about the issues facing incarcerated women and girls and the impact the significant increase in the female prison population is having on families, children and our communities, including at the 2017 Women’s March, among thousands of venues, both high profile and community level. Donna’s own life took an unexpected and life-changing turn when as a child she was lured from Jamaica to the United States. Her memoir,  A Little Piece of Light, (Hachette, 2018) tells the story of the childhood abuse she endured, the spiral of events that led to her incarceration and how she learned to live, love and trust all over again.

Piper Kerman is the author of the memoir Orange is the New Black: My Year in a Women’s Prison. She serves on the board of directors of the Women’s Prison Association and the advisory boards of InsideOUT Writers, Healing Broken Circles, and JustLeadershipUSA. Ms. Kerman has been called as a witness by the U.S. Senate Judiciary Subcommittee on the Constitution, Civil Rights and Human Rights to testify on solitary confinement and women prisoners, and by the U.S. Senate Governmental Affairs and Homeland Security Committee to testify about the Federal Bureau of Prisons, and has spoken at the White House on re-entry and employment. In 2014, she was awarded the Justice Trailblazer Award from John Jay College’s Center on Media, Crime & Justice and the Constitutional Commentary Award from The Constitution Project; the Equal Justice Initiative recognized Ms. Kerman as a Champion of Justice in 2015. She teaches writing in two Ohio prisons as an Affiliate Instructor with Otterbein University.