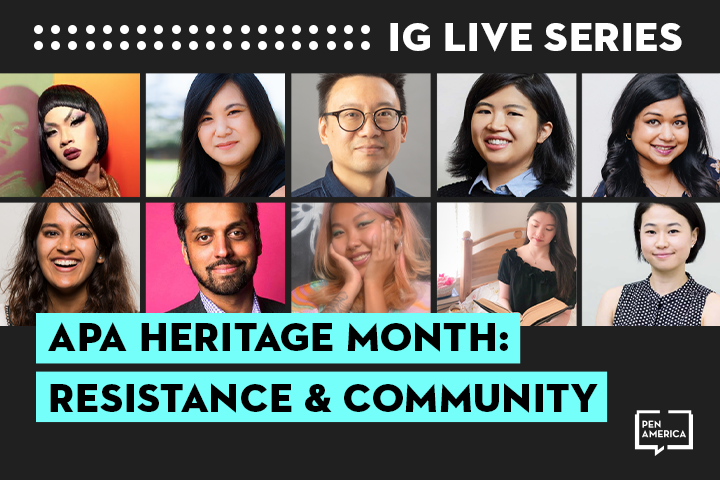 The NYC Literary Action Coalition stands in support of Asian, Asian American, and Pacific Islander communities that have been targeted by rising hate and racism in the past year during the COVID-19 pandemic.

This event will feature Asian American writers Wo Chan and Jenn Fang in conversation about how writing and literary practice can support activism efforts in support of Asian American communities.

Wo Chan is a poet and drag performer. They are a winner of the 2020 Nightboat Books Poetry Prize and the author of Togetherness (2022). Chan has received fellowships from MacDowell, the New York Foundation of the Arts, Kundiman, the Asian American Writers Workshop, Poets House, and Lambda Literary. Their poems appear in POETRY, WUSSY, The Massachusetts Review, No Tokens, and The Margins. As a member of the Brooklyn-based drag/burlesque collective Switch N’ Play, Chan has performed at the Whitney Museum of American Art, MoMA PS1, National Sawdust, New York Live Arts, and elsewhere. They are currently the communications manager of Lambda Literary and the editor of Lambda Literary Review. Find them at @theillustriouspearl. Photo Credit: Mettie Ostrowski

Jenn Fang is founder of Reappropriate.co, one of the web’s oldest and most popular blogs dedicated to Asian American and Pacific Islander feminism, pop culture, and politics. Her writing has been featured in several outlets, including Prism, NBC News, Teen Vogue, The Washington Post, and Quartz. She also appears monthly as a guest cohost for the “Model Majority Podcast,” which examines national politics through an Asian American lens.

Alejandro Heredia is the community outreach manager at PEN America, where he develops literary advocacy and press freedom programming throughout the country. Since 2016, he has used his writing and organizing skills to create and support literary events in the Bronx, including efforts to resist gentrification in low-income communities. Heredia is passionate about the creative, intellectual, and social lives of Black LGBTQ people across the diaspora.

This event will feature The New Yorker contributor Hua Hsu in conversation with Asian American Writers’ Workshop executive director Jafreen Uddin as they explore the intersections of literature and activism. They will discuss the history of AAPI organizing and its critical connection to APA literary culture.

Hua Hsu is a staff writer at The New Yorker and author of the forthcoming memoir Stay True. He teaches at Vassar College and serves on the boards of the Asian American Writers’ Workshop and Critical Minded, an initiative to support cultural critics of color. Photo Credit: Karl Rabe/Vassar College

Jafreen Uddin was appointed executive director of the Asian American Writers’ Workshop in January 2020. She is the first woman to lead the organization since its founding in 1991. With over a decade of experience working in the public sector, she specializes in communications, education, and fundraising.

She most recently served as deputy director of development for special events with PEN America, managing a high-level portfolio of events and cultivation activities. Prior to joining PEN America, she helped oversee executive education as an assistant director with the NYU Stern School of Business, developing and coordinating both degree and non-degree programming for cohorts of senior-level executives. She began her career with a nearly eight-year stint at the Brennan Center for Justice at the NYU School of Law, where she helped create the infrastructure for the public programming calendar of events, and spent nearly three years managing an online book salon for Aslan Media, spotlighting writers and artists from the greater Middle East/South Asia region.

Gina Chung is the communications manager overseeing email marketing at PEN America. Most recently, Chung was the production editor at the New York City Campaign Finance Board, where she managed the agency’s email marketing efforts and oversaw the creation of several reports and publications. Prior to her time at the Campaign Finance Board, she worked in the book publishing industry, first in the publicity department of Penguin Random House and then as an assistant editor at Oxford University Press. She holds an MFA in fiction from The New School’s Creative Writing Program and a BA in literary studies from Williams College, where she graduated cum laude.

PEN America’s Instagram stories will be taken over by The Juggernaut founder and CEO Snigdha Sur. Sur will share posts about the importance of South Asian storytelling and journalism; provide resources; and share some of her favorite books, stories, and writers writing about South Asian issues today. She will also answer questions from PEN America’s followers, and engage the audience through polls and other interactive Instagram story features.

Snigdha Sur has worked at McKinsey & Company and advised BuzzFeed, Quartz, Amazon Studios, Scroll.in, and Reese Witherspoon’s Hello Sunshine. She got her MBA at Harvard University, studied economics and South Asian studies at Yale University, and spent five months coding at Flatiron School. She was born in Chhattisgarh, India; grew up in the Bronx and Queens, NY; and has worked and lived in Mumbai, India. She can speak Hindi, Bengali, and Mandarin. She loves Bollywood and reading novels.

This event will feature Jafreen Uddin in conversation with writer and speaker Wajahat Ali to talk about the possibilities of celebrating the complex, varied Asian American experience, from the quotidian (everyday lived experience) to resistance (protest, activism, etc.). What is the role of Asian American people’s joy, in the face of systemic oppression? How do we protect joy in our lived experiences and in our activist liberation? How do we amplify complex and varied Asian American narratives in 2021? Ali will speak about being a Muslim writer, father, and public speaker in the context of current issues affecting Asian American communities.

Wajahat Ali is a columnist at The Daily Beast, public speaker, recovering attorney, and tired dad of three cute kids. He is currently working on his first book Go Back to Where You Came From: And, Other Helpful Recommendations on Becoming American which will be published in Spring 2022 by W. W. Nortion & Company. He believes in sharing stories that are by us, for everyone: universal narratives told through a culturally specific lens to entertain, educate, and bridge the global divides.

He also enjoys writing about himself in the third person. He frequently appears on television and podcasts for his brilliant, incisive, and witty political commentary. (That’s what his mom says, anyway). Born in the Bay Area, CA to Pakistani immigrant parents, Ali went to school wearing Husky pants and knowing only three words of English. He graduated from the University of California, Berkeley with an English major and became a licensed attorney. He knows what it feels like to be the token minority in the classroom and the darkest person in a boardroom. Like Spiderman, he’s often had the power and responsibility of being the cultural ambassador of an entire group of people, those who are often marginalized, silenced, or reduced to stereotypes. His essays, interviews, and reporting have appeared in The New York Times, The Atlantic, The Washington Post, The Guardian, and The New York Review of Books. Ali has spoken at many organizations, from Google to Walmart-Jet to Princeton University to the United Nations to the Chandni Indian-Pakistani Restaurant in Newark, CA, and his living room in front of his two kids.

Jafreen Uddin was appointed executive director of the Asian American Writers’ Workshop in January 2020. She is the first woman to lead the organization since its founding in 1991. With over a decade of experience working in the public sector, she specializes in communications, education, and fundraising.

She most recently served as deputy director of development for special events with PEN America, managing a high-level portfolio of events and cultivation activities. Prior to joining PEN America, she helped oversee executive education as an assistant director with the NYU Stern School of Business, developing and coordinating both degree and non-degree programming for cohorts of senior-level executives. She began her career with a nearly eight-year stint at the Brennan Center for Justice at the NYU School of Law, where she helped create the infrastructure for the public programming calendar of events, and spent nearly three years managing an online book salon for Aslan Media, spotlighting writers and artists from the greater Middle East/South Asia region.

The Power of Books: How Stories Strengthen Community Bonds for APA Readers and Writers

This event will dive into how a passion and hunger for reading can lead to a deeper connection to Asian American identity, culture, and community. Our guests will discuss questions such as: How does fiction, nonfiction, poetry, and other forms of storytelling shape perceptions of ourselves as Asian Americans? What books, poems, or words deepened our relationship with other Asian Americans and helped us to more clearly define how we see ourselves in the world?

Tiffany (@readbytiffany) is a Taiwanese American book blogger and the cofounder of Subtle Asian Book Club, a book club dedicated to reading stories by Asian authors.

Mimi Zhu (they/them) is a queer Chinese-Australian writer who is currently working on their first published book Be Not Afraid of Love, coming out with Penguin Books in 2022.

Hannah Lee is the senior social media manager at PEN America. Before joining PEN America, Lee worked as the digital content manager at the Times Square Alliance, heading up social media strategy and content creation across multiple channels for one of the most iconic public spaces in the world. Her work with the Times Square Alliance has given her opportunities to work with organizations such as the Committee to Protect Journalists, Me Too Movement, International Rescue Committee, and more. Lee has also worked as a marketing and communications associate for small to mid-sized businesses in Manhattan and Queens.