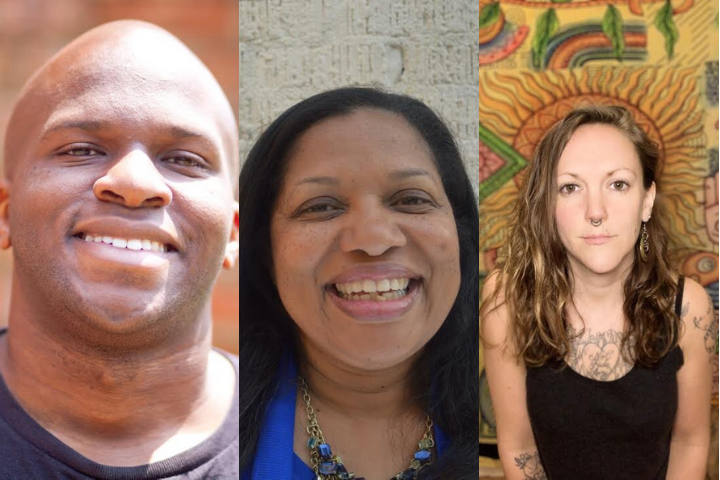 PEN America Birmingham and the Magic City Poetry Festival present the inaugural event of the All Around Alabama Reading Series, where we pass the reading and organizing baton around the state of Alabama to create a map of poets that speaks to the vitality and spirit of the state.

Jason McCall holds an MFA from the University of Miami. His collections include Two-Face God; Dear Hero (winner of the 2012 Marsh Hawk Press Poetry Prize); Silver; I Can Explain; Mother, Less Child (co-winner of Paper Nautilus’s 2013 Vella Chapbook Contest); and A Man Ain’t Nothin’. He and P.J. Williams are the editors of It Was Written: Poetry Inspired by Hip-Hop. He is a native of Montgomery, AL, and he teaches at the University of North Alabama.

Kimberly Casey was born and raised in Massachusetts, though she now calls Huntsville, AL home. She is the founder and president of Out Loud Huntsville (HSV), a nonprofit organization dedicated to inspiring community outreach and activism through written and spoken word. She received her MFA from Pacific University in 2021. Casey was a member of the Out Loud HSV Poetry Slam Team and coached the team from 2017 to 2019. She has competed at Southern Fried Poetry Slam, the College Unions Poetry Slam Invitational, Texas Grand Slam, and more. Her work has appeared in Southern Women’s Review, Passengers Journal, and Lost Balloon, among others. Through Out Loud HSV and independently, Casey hosts and organizes a wide array of literary events such as youth poet meetups; storytelling events; workshops on craft, voice, performance; and everything in between.

Jacqueline Allen Trimble lives and writes in Montgomery, AL. She is a National Endowment for the Arts Poetry Fellow, Cave Canem Fellow, and Alabama State Council on the Arts Literary Fellow. In addition to her academic work, her poetry has appeared in various journals including The Louisville Review, The Offing, and Poet Lore. Her work was included in the anthology The Night’s Magician, a collection of 80 poems by contemporary writers on the moon. Her essay on writing, “A Woman Explains How Learning Poetry is Poetry and Not Magic Made Her a Poet,” appears in Southern Writers on Writing, an anthology of 26 contemporary Southern writers. She recently wrote five episodes for Die Testament, a South African soap opera that streamed on Netwerk24 in the fall of 2019. Published by NewSouth Books, American Happiness, her debut collection, was named the Best Book of 2016 by Seven Sisters Book Awards and won the 2016 Balcones Poetry Prize. Trimble, who has won numerous teaching and academic awards, holds a BA in English from Huntingdon College and an MA and Ph.D. in English from the University of Alabama. She is a professor of English and chairs the Department of Languages and Literatures at Alabama State University.