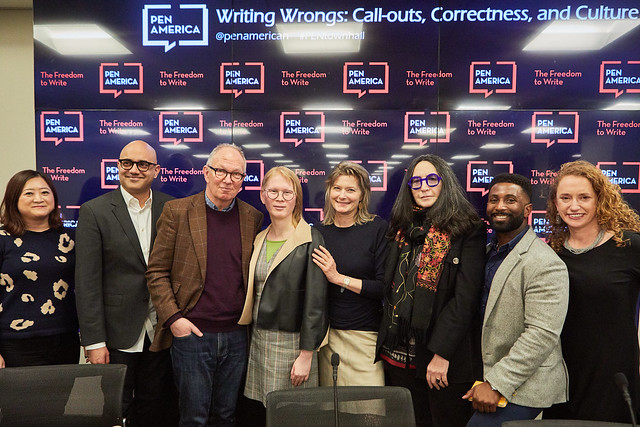 Amid polarized politics; heightened awareness of the entrenched legacies of sexism, racism, and other forms of intolerance; and the rise of digital platforms where norms and boundaries are constantly renegotiated, writers and artists have been prompted to reconsider their roles. Writing can inform, entertain, question conventional wisdom, correct societal wrongs, but not necessarily accomplish all of the above. In this panel of diverse writers and thinkers we will explore the moral and creative imperatives of writing in an era when call-outs, competing definitions of political correctness, and the unpacking of buried legacies of exclusion have all come to the foreground.

Ayad Akhtar is a playwright, novelist, and the winner of the 2013 Pulitzer Prize for Drama for Disgraced. Most recently, his play Junk received the 2018 Kennedy Prize for American Drama and was nominated for the 2018 Tony Award for Best Play. His other plays, The Who & The What and The Invisible Hand, received Off-Broadway runs and are currently being produced around the world, winning multiple awards and garnering nominations for the Evening Standard and Olivier Awards in London. As a novelist, he is the author of American Dervish, published in over 20 languages worldwide. As a screenwriter, he was nominated for an Independent Spirit Award for Best Screenplay for The War Within. He is also the recipient of an Award in Literature from the American Academy of Arts and Letters and the Steinberg Award for Playwriting. Akhtar has received fellowships from the American Academy in Rome, MacDowell, The Sundance Institute, and Yaddo, where he serves as a Board Director. He joined the PEN America Board in 2015.

Ian Buruma is the author of many books, including The Wages of Guilt: Memories of War in Germany and Japan (1995), The Missionary and the Libertine: Love and War in East and West (1996), Murder in Amsterdam: The Death of Theo Van Gogh and the Limits of Tolerance (2006), and Year Zero: A History of 1945 (2013). He was the Paul W. Williams Professor of Human Rights and Journalism at Bard and a regular contributor to The New York Review of Books, The New Yorker, and The New York Times, among other publications. His new book is a ­collection of essays from these pages, Theater of Cruelty: Art, Film, and the ­Shadows of War. His Year Zero: A History of 1945 is now out in paperback.

Jennifer Egan is a Pulitzer-Prize winning writer and the President of PEN America. Her most recent work, Manhattan Beach, won the 2018 Carnegie Medal for literary excellence and was recently selected as the One Book, One New York City-wide read. She is also the author of A Visit from the Goon Squad, which won the 2011 Pulitzer Prize, the National Book Critics Circle Award for Fiction, and the Los Angeles Times Book Prize. Other works include: The Invisible Circus, a novel that became a feature film starring Cameron Diaz in 2001; Look at Me, a finalist for the National Book Award in fiction in 2001; and The Keep. Her short stories have appeared in The New Yorker, Harper’s, Granta, McSweeney’s, The Best American Short Stories, and other magazines and collections. She is a recipient of a Guggenheim Fellowship, a National Endowment for the Arts Fellowship in Fiction, and a Dorothy and Lewis B. Cullman Fellowship at the New York Public Library. Her non-fiction articles appear frequently in The New York Times Magazine, and her 2002 cover story on homeless children received the Carroll Kowal Journalism Award. Her article “The Bipolar Kid” received a 2009 NAMI Outstanding Media Award for Science and Health Reporting from the National Alliance on Mental Illness. She was born in Chicago and raised in San Francisco. She joined the PEN America Board in 2012.

Inkoo Kang is a staff writer at Slate, where she writes about movies, television, and more. She was previously the chief TV critic at MTV News.

Wesley Morris  is a critic-at-large for The New York Times. Previous to The Times, Mr. Morris worked at Grantland as a staff writer and the Sportstorialist columnist and cohost of “Do You Like Prince Movies?” He was a film critic at The Boston Globe from 2002 to 2013, and before that at The San Francisco Chronicle and The San Francisco Examiner. Mr. Morris was awarded the Pulitzer Prize for his criticism at the Boston Globe in 2012 and, while at Grantland, was a National Magazine Award finalist for Columns and Commentary in 2015. He was born in Philadelphia and received a bachelor’s degree from Yale University for film studies. Some of his spare time is spent making piecrusts, complaining about real estate development, and teaching writing to high school students in Bushwick.

Suzanne Nossel currently serves as the Chief Executive Officer of PEN America, the leading human rights and free expression organization. Since joining in 2013, she has doubled the organization’s staff, budget, and membership, spearheaded the unification with PEN Center USA in Los Angeles and the establishment of a Washington, D.C. office, and overseen groundbreaking work on free expression in Hong Kong and China, Myanmar, Eurasia, and the United States. She is a leading voice on free expression issues in the United States and globally, writing and being interviewed frequently for national and international media outlets. Her prior career spanned government service and leadership roles in the corporate and nonprofit sectors. She has served as the Chief Operating Officer of Human Rights Watch and as Executive Director of Amnesty International USA. During the first term of the Obama Administration, Nossel served as Deputy Assistant Secretary of State for International Organizations, where she led U.S. engagement in the United Nations and multilateral institutions, on human rights and humanitarian issues. During the Clinton Administration, Nossel was Deputy to the U.S. Ambassador for UN Management and Reform at the U.S. Mission to the United Nations, where she was the lead negotiator in settling U.S. arrears to the world body. During her corporate career, Nossel served as Vice President of U.S. Business Development for Bertelsmann and as Vice President for Strategy and Operations for the Wall Street Journal. Nossel coined the term “Smart Power,” which was the title of a 2004 article she published in Foreign Affairs Magazine and later became the theme of Secretary of State Hillary Clinton’s tenure in office. Nossel is a featured columnist for Foreign Policy magazine and has published op-eds in The New York Times, Washington Post, LA Times, and dozens of other outlets, as well as scholarly articles in Foreign Affairs, Dissent, Democracy, and other journals. Nossel serves on the Board of Directors of the Tides Foundation. She is a former senior fellow at the Century Foundation, the Center for American Progress, and the Council on Foreign Relations. Nossel is a magna cum laude graduate of both Harvard College and Harvard Law School.

Francine Prose is the author of 21 works of fiction, including Mister Monkey; The New York Times best seller Lovers at the Chameleon Club, Paris 1932; A Changed Man, which won the Dayton Literary Peace Prize; and Blue Angel, a finalist for the National Book Award. Her works of nonfiction include Anne Frank: The Book, The Life, The Afterlife, and The New York Times best seller Reading Like a Writer. The recipient of numerous grants and honors, including a Guggenheim, a Fulbright, and a Director’s Fellow at the Center for Scholars and Writers at the New York Public Library, she is a former president of PEN American Center and a member of the American Academy of Arts and Letters and the American Academy of Arts and Sciences. She lives in New York City.

Meredith Talusan is an award-winning author, journalist, and editor. Her debut memoir, Fairest, is forthcoming from Viking/Penguin Random House. Her essays and stories have appeared or are forthcoming in a number of volumes, including Not That Bad: Dispatches from Rape Culture, Burn It Down, and Nasty Women: Feminism, Resistance and Revolution in Trump’s America. She has published features, opinion pieces, and essays for The Guardian, The New York Times, VICE Magazine, The Atlantic, The Nation, and many other publications. She has received awards form GLAAD and the Society of Professional Journalists, among others. She is also a founding editor for them., Condé Nast’s LGBTQ+ digital platform.