This dinner will be hosted by Sue Lehmann and Ted Dreyfus in their Upper West Side home on Monday, December 10, 2018, at 7:30pm. 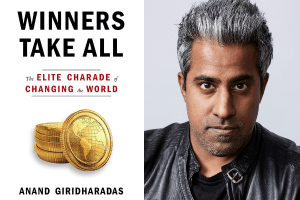 Anand Giridharadas will discuss his latest book, Winners Take All: The Elite Charade of Changing the World, an insider’s groundbreaking investigation of how the global elite’s efforts to “change the world” preserve the status quo and obscure their role in causing the problems they later seek to solve. Anand was a foreign correspondent and columnist for The New York Times from 2005 to 2016, and has also written for The Atlantic, The New Republic, and The New Yorker. He is an Aspen Institute fellow, an on-air political analyst for MSNBC, and a former McKinsey analyst.

This dinner is sold out. Please contact Jafreen Uddin at juddin@pen.org for more information and to be added to the waiting list.