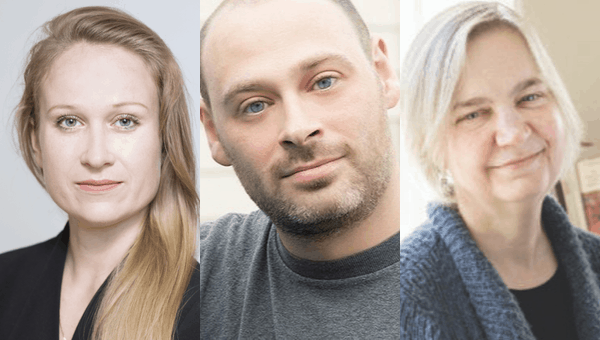 With the crackdown on dissent and the subsequent chilling effect on free expression, artists and writers around the world continue to take a stand against repression. In countries with authoritarian regimes across Eurasia, their activism has had terrifying consequences: Akram Aylisli has experienced continuous harassment by Azeri authorities since 2012; Oleg Sentsov spent 5 years in the most severe Russian prison for a crime he did not commit; and dozens of citizen journalists continue to be arrested in Crimea. Polina Kovaleva (Project Director, Eurasia, PEN America), Lev Golinkin (A Backpack, a Bear, and Eight Crates of Vodka), and Katherine Young (Farewell, Aylis: A Non-Traditional Novel in Three Works) come together to talk about the cases of Eurasian artists and writers who have been persecuted for their views, as well as to give their perspective on the intersection of political activism, art, and literature.

Polina Kovaleva, Ph.D., joined the PEN America team in 2016 as the first Free Expression Programs coordinator for Eurasia. She came to New York from Paris, where she was with UNESCO’s Division of Freedom of Expression and Media Development. She is an active supporter of women’s and youth’s rights around the world, and is a member of the IFEX Council. Prior to joining PEN America, Kovaleva worked for Habitat Pro Association, an NGO advocating for the rights of indigenous peoples in Peru, particularly those of indigenous women and youth. She was also a radio correspondent for national radio and a marketing and communications manager with a major bank in her native Russia.

Lev Golinkin is the author of A Backpack, a Bear, and Eight Crates of Vodka, Amazon’s Debut of the Month, a Barnes & Noble Discover Great New Writers program selection, and winner of the Premio Salerno Libro d’Europa. Golinkin, a graduate of Boston College, came to the United States as a child refugee from the eastern Ukrainian city of Kharkov (now called Kharkiv) in 1990. His writing on the Ukraine crisis, Russia, the far right, and immigrant and refugee identity has appeared in the New York Times, Washington Post, Los Angeles Times, CNN, the Boston Globe, Politico Europe, and Time.com, among others; he has been interviewed by MSNBC, NPR, ABC Radio, WSJ Live and HuffPost Live.

Katherine E. Young served as the inaugural Poet Laureate of Arlington, Virginia, from 2016–2018. She was a 2017 National Endowment for the Arts Translation Fellow for her work on a trio of novellas by Akram Aylisli from Azerbaijan titled Farewell Aylis: A Non-Traditional Novel in Three Works. Her poems, reviews, and criticisms have been published in Prairie Schooner, Shenandoah, The Iowa Review, and many other publications. Young is a founding member, former co-director, and has served on the Advisory Board for the D.C.-Area Literary Translators Network.