A Public Space and PEN American present: A Celebration of Eva Zeisel 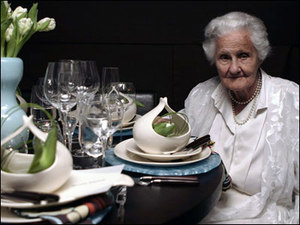 “It had a great feeling of unreality. I mean, I was a designer of china; I was not in the business of killing Stalin. Imagine yourself! Most of the time I did not believe that I would have an opportunity to relate this to anybody. I really did not. There was very little probability that I would live—nobody wished me well.”

A Public Space magazine and PEN American Center partner to celebrate the life and work of the acclaimed designer Eva Zeisel on what would have been her 106th birthday. Shortly before her death, Eva Zeisel’s prison memoir, chronicling her experience in a Soviet concentration camp, was published in A Public Space Issue 14. Friends and admirers of Eva’s work will join A Public Space and PEN to engage in a discussion of her remarkable achievements as a woman and artist.