50 Years Post-MLK: Media, the Magic City, and How the South Was Won 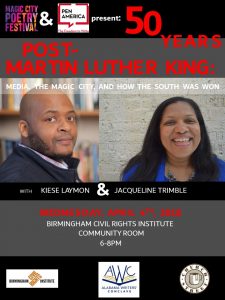 The media was involved with the passing of the Civil Rights Act in 1965 with the national coverage of the Birmingham campaign of the Civil Rights Movement, but that same media has held the South in suspended animation. That is, the South is shown as backwards and rigidly conservative or, in the case of Birmingham, shown as a beacon of completion as it relates to the Civil Rights struggle. How can the South navigate these misrepresentations to make way for real progress, and how can it serve as an example or a radar for U.S. progress at large?

In this panel discussion, writer/thinker Kiese Laymon and poet Jacqueline Trimble discussed the role the media has played in the representation or misrepresentation of Birmingham and the American South and the progress (or lack thereof) we’ve made. This panel took place on the 50th anniversary of the assassination of Martin Luther King, Jr., and it served as commemoration of this tragic moment in American history.

The panel discussion was made possible through a grant from PEN America’s Press Freedom Incentive Fund, which supports projects that underscore the vitality of journalism through the impact it has on a range of local issues. 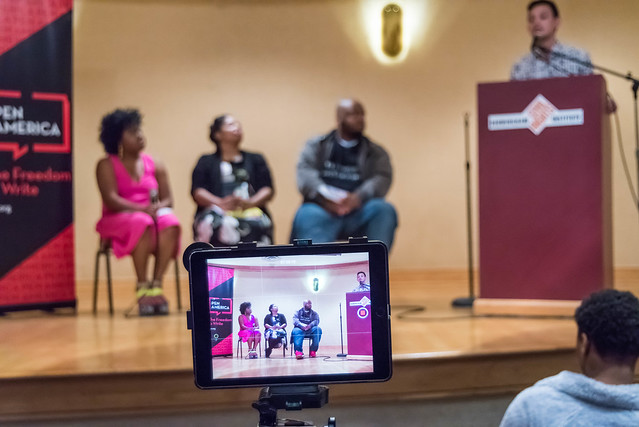 We're excited to announce that we are now accepting applications for our grants & fellowships! Submissions are open through August 1, 2020 for PEN America's Grants & Fellowships! Find funding at https://pen.org/literary-awards/grants-fellowships.

Tomorrow, ARC is launching "¡El Arte no Calla!," a monthly podcast in which our Latin America rep @ale_zagato will be joined by artists + activists to discuss free expression in the region. English transcripts will be on our website. #ElArteNoCalla #ARCLatinoamerica

On #thePENpod, futurist and author @JamieMetzl discusses the brave new world that this pandemic might precede. We also preview a @NYDailyNews piece from our colleague @summerelopez about journalists on the front lines of the crisis.
LISTEN 🎧: https://bit.ly/2WYYeEp.