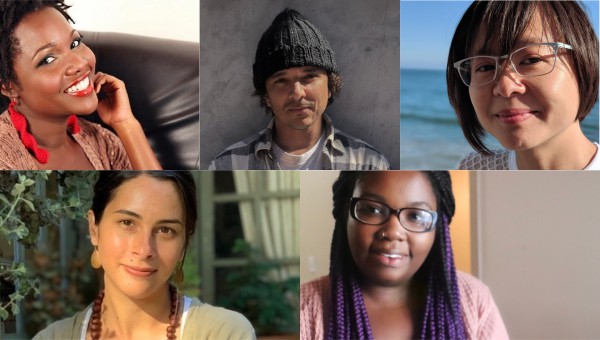 The Emerging Voices Fellowship is a literary mentorship that has provided new writers with the skills they need to launch a professional writing career since 1996, and LACE has been hosting this reading for the last five years. Hailed by many audience members as a favorite literary event of the season, past notable fellows have included Reyna Grande, Cynthia Bond, and Natashia Deón.

Damien Belliveau is a native of the San Francisco Bay Area and has spent over a decade telling stories in the world of reality television as an editor and director at Bunim-Murray Productions. The founder of The PartBlack Project, a Q&A photography series documenting ethnically mixed people like himself, Damien is working on his first memoir.

Megan Dorame is a Tongva poet who lives and writes in Santa Ana, California. She holds a BA in anthropology from the University of Oklahoma, and works to reclaim and revitalize the Tongva language. Her work has appeared in The Ear, Dryland, and The Offing, among others. Megan is working on a collection of poems inspired by the complicated history of her people.

Shannon Gatewood was born and raised in Chicago and currently resides in Los Angeles. She has a bachelor’s degree in sociology, has worked in both the nonprofit and corporate sectors, and currently works in franchise support for a math tutoring company. Shannon is writing her first novel, a story that follows a family of Black women after their father and husband dies suddenly of a heart attack.

M. Kiguwa graduated from the London School of Economics and Political Science with her master’s in media, communication, and development, and has worked in the entertainment industry in the United States, Europe, and Africa for over 10 years. She is currently writing an adventure memoir spanning multiple generations.

Claire Lin grew up in Taiwan, received a bachelor’s degree in electrical engineering from National Taiwan University, and went on to get her master’s from Columbia Business School. The winner of the 2018 James Kirkwood Literary Prize, Claire is currently working on a collection of magical realism stories about people transcending grief and mortality.