PEN America at the 2019 Los Angeles Times Festival of Books 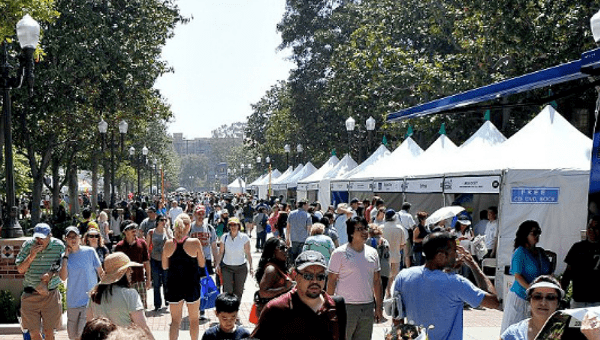 Since 1996, The Los Angeles Times Festival of Books has become a world renowned experience gathering writers, poets, artists, filmmakers, musicians, and emerging storytellers like no other. Today over 150,000 people attend, making it the largest festival of its kind in the United States.

PEN America is thrilled to take part in this celebration of the literary community. Be sure to join us at Booth #235 at the exhibitor bookfair for the chance to meet PEN America staff, learn more about our work, and receive discounts on your membership.

Stop by Booth #235 for discounted merchandise and to chat with our staff about the work PEN America does!

One of the leading writers and scholars at work today, Ngũgĩ wa Thiong’o was born in Limuru, Kenya, in 1938. He is the author of A Grain of Wheat, Weep Not, Child, and Petals of Blood, as well as Birth of a Dream Weaver, Wrestling with the Devil, and Minutes of Glory. Currently Distinguished Professor of English and Comparative Literature at the University of California, Irvine, Ngũgĩ is recipient of 12 honorary doctorates, among other awards.

Michelle Franke is the executive director of PEN America in Los Angeles where she oversees management, programs, fundraising, and growth. Franke has spent the past decade developing arts and education programs, producing over 200 events across Southern California. Named a “Face To Watch” by the Los Angeles Times, Franke has taught in the UCLA Extension Writers’ Program and at the University of Redlands. In 2010, she founded the literary journal, The Rattling Wall, which published the work of over 275 writers during its eight-year run. Prior to joining PEN America, Franke was a store manager at Kramerbooks in Washington, D.C., and at Book Soup in Los Angeles, two of the country’s most beloved independent bookstores. Franke received her MFA in creative writing with honors from American University. As a poet, she’s received scholarships and fellowships, notably from the New York State Summer Writers Institute and the Folger Shakespeare Library. In recent years, Franke has appeared at the Los Angeles Times Festival of Books, Association of Writers & Writing Programs (AWP), and on KPCC and KCRW, and elsewhere, where she’s interviewed writers and artists and discussed her own career in literary arts, advocacy, and community organization. She lives in Santa Monica, CA, with her husband and son.