The Voice There Before You: Gentrification as Literary Subject and Activism 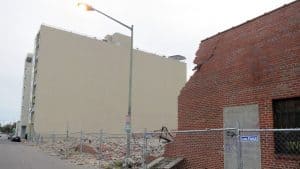 “People have a culture that’s been laid down for generations and you come in and now shit gotta change because you’re here?” From Spike Lee to best sellers, gentrification finds a home nationwide and in major cities like New York, Los Angeles, and Portland. What does gentrification look like in 2019, and how does it create inequity in free expression? Presented by PEN America, this panel explores the ways in which gentrification becomes not only subject matter but inspiration for literary activism.

Clarisse Rosaz Shariyf is the director of public programs at PEN America. She has a decade of experience in curating public arts and educational programs. Formerly, as the manager of public programs at the Schomburg Center for Research in Black Culture, The New York Public Library, she produced a year-round schedule of 60-80 events and oversaw audience development, public engagement strategies, and cultural community partnerships. She launched the Center’s innovative digital programming strategy with groundbreaking conversations on contemporary social justice issues with leading edge writers, artists, and scholars. In addition, she is a Senior Associate at Justice and Sustainability Associates, a D.C. based for-profit alternative dispute resolution and civic engagement firm specializing in consensus building. She holds an MA in Social Sciences from the University of Chicago and an MA in English Civilization from the University of the French West Indies.

Jessica Ceballos y Campbell curates literary arts programming at Avenue 50 Studio (and throughout L.A.), where she also co-organizes the local L.A. Tenants Union to fight rampant displacement. Her work has been published in various journals and anthologies, and she’s published three chapbooks.

In addition to writing poetry, Javon Johnson is an assistant professor and director of African American and African Diaspora Studies, and holds an appointment in Gender and Sexuality Studies in the Interdisciplinary, Gender, and Ethnic Studies Department at the University of Nevada, Las Vegas.

Renée Watson is a New York Times best-selling author and educator. Her YA novel Piecing Me Together received a Coretta Scott King Award and Newbery Honor. In 2016, Renée launched I, Too Arts Collective, a nonprofit housed in the Harlem brownstone where Langston Hughes lived and created.