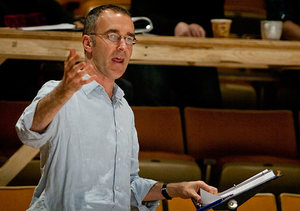 For the second year in a row, the PEN Translation Committee has collaborated with the hotINK Festival of International Plays, which just opened yesterday. The festival, which has introduced plays from over fifty countries to NYC audiences since 2002, is curated by Catherine Coray and now features (thanks to Translation Committee members Cobina Gillitt and Jennifer H. Zoble) a panel about translating for the theater including translators who worked on plays for this year’s festival as well as local conversation partners. Here’s the translation panel designed for hotINK 2013:

Translation for the Theater: a hotINK at the Lark/PEN American Center Collaboration
Sunday, April 21 at 4:30pm

And here’s the lineup for the rest of the festival:

Outside In by Claudine Toutoungi
From United Kingdom
Directed by Giovanna Sardelli
Wednesday, April 17 at 7pm

Iphigenia at Aulis by Nicolas Billon
From Canada
Directed by Lisa Peterson
Friday, April 19 at 7pm

Poison by Lot Vekemans
From The Netherlands
Directed by Erwin Maas
Translated by Rina Vergano
Sunday, April 21 at 2pm

hotINK is also partnering with two online literary journals,Asymptote and InTranslation/The Brooklyn Rail, which will feature excerpts from the translated hotINK plays and interviews with their authors and translators in upcoming issues.

For more information, including synopses of the plays and instructions on how to make reservations, visit the festival website here.