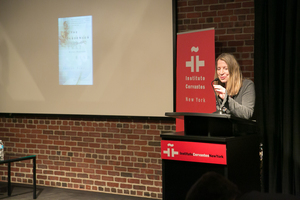 This tribute was written by Esther Allen. She is the translator of Antonio Muñoz Molina’s In Her Absence et al, and the author of the International PEN Report on Translation and Globalization. She is also the co-founder of the PEN World Voices Festival.

In the summer of 1988, I attended a translation workshop at New York University with Edith Grossman. I’d finished my coursework by then so I couldn’t enroll for credit, but I sat in as an auditor to try and learn what I could about a practice I was already engaged in and becoming more and more committed to. Edie was committed, as well; she let me submit the assignments and looked them over and commented, even though I was only an auditor. She was a powerful presence, somewhat daunting at first, but so down to earth and straightforward that she soon put everyone around the table at ease.

She was also a brilliant teacher. In one of the initial sessions, she talked us through a paragraph from the novel she was working on—Gabriel García Márquez’s El general en su laberinto. Simón Bolívar wakes up in the morning and gets ready for his day, putting his clothes on, and shaving. That was the tricky part. The general “tried to see himself in the mirror as little as possible, so he would not have to look into his own eyes”—as Edie’s published version puts it—so he walked around the room and finished shaving in a way that the Spanish describes as “a ciegas.” (“Ciego” means blind; “a ciegas” is a standard way of describing doing something without being able to see what you’re doing.)

Edie told us that when she translated the expression as “blindly” though, the image of the general walking around the room “shaving blindly” took on disturbing connotations the Spanish didn’t have. It seemed to imply that he was in some sort of emotional state or that some risk was being taken (let’s remember it’s the early 19th century and he’s shaving with a straight razor). Furthermore, Edie was under a strict injunction from García Márquez. In his own writing, he refused to use any adverb ending in -mente (the Spanish suffix that makes an adjective into an adverb) and he required his translator, accordingly, to ban all adverbs ending in -ly from the English translation.

She asked us what we would do. None of us could come up with anything that was any good or that obeyed García Márquez’s stricture: “shaving carefully,” “shaving intuitively,” “shaving on instinct,” “shaving without looking,” “shaving with blind motions of his hands”—all terrible solutions! Then, rather pleased with herself—and with very good reason—she unveiled hers: “He finished shaving by touch…”

That moment has stayed with me because it crystallized what I learned about translation from Edith Grossman that summer and have continued to learn from her through years of friendship and collaboration: that the only way to translate is visceral, sensory, dramatic, embodied. Edie taught me that translation is done by touch.