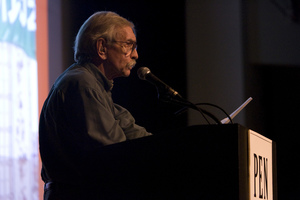 We at PEN America mourn the loss of Edward Albee, a long-time PEN member and staunch supporter of freedom of expression. Considered the foremost playwright of his generation, Albee wrote psychologically astute and piercing dramas that explored the contentiousness of intimacy, the gap between self-delusion and truth, and the roiling desperation beneath the facade of contemporary life. Albee died on Friday, September 14 at his home in Montauk, New York.
Edward Albee joined PEN in the 1960’s and was an active member of the Writers in Prison Committee. For over 50 years he helped provide a voice and a platform for writers and artists around the world who were in prison or in peril for thier work. On December 31, 2009 Albee joined E.L Doctorow, A.M. Homes, Don DeLillo, Honor Moore, Kwame Anthony Appiah, and dozens of other writers on the steps of the New York Public Library to demand the release of Liu Xiaobo, the Chinese poet and scholar who had been sentenced to 11 years in prison.
In 2011, Edward Albee received the PEN America Literary Service Award, which honors a writer whose critically acclaimed work illuminates the human condition in original and powerful ways.