Edna O’Brien, winner of the 2018 PEN/Nabokov Award for Achievement in International Literature, speaks at the 2018 PEN America Literary Awards Ceremony. Judges Michael Ondaatje and Diana Abu-Jaber cited O’Brien as “a master of the page,” whose writing “transcend[s] genres and periods.” O’Brien’s work includes The Country Girls, Girl With Green Eyes, Saints and Sinners, and, most recently, The Little Red Chairs. Read her speech below. 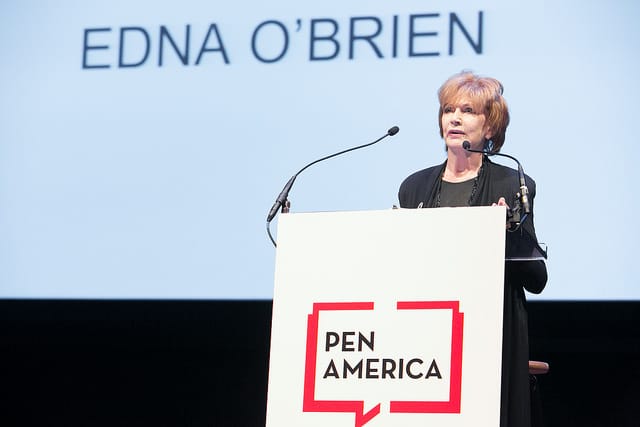 I don’t ask or expect you to understand that but my first language was Irish. English was spoken at home and Irish was in the classroom, so it accounts for some of my schizophrenia and other aberrations. The marriage of two languages, Irish and English, was very helpful and stimulating.

PEN was founded in 1921 by John Galsworthy, and my god, think how much PEN has done for writers, for the world, for enlightenment, and for all of us. We are the lucky ones some of us here tonight, some of us here last year or next year. But PEN also remembers the persecuted—people at this very moment in jails in Turkey and Syria, all over the world tortured, silenced, and never to come out. Because they are unable to reach us. However, we have to think of them and we do.

I would like to send a belated Valentine to the two judges who from the pool of fiction chose me: Michael Ondaatje and Diana Abu-Jaber. They are not here; they are probably busy writing, but I want to thank them very much.

Now there is a puzzle for me this evening, because the award I am being given is the PEN/Nabokov Award. And Mr. Nabokov, genius that he was, was quite scathing of women. In fact, he didn’t think women could write very well, if at all, and he accused them dabbling in the sentimental lake dreamings of Emma Bovary. Even though he loved Flaubert, Flaubert said he himself was Emma Bovary, so what would Mr. Nabokov say about that conundrum?

But of course I admire him. His book Lectures on Literature is unrivaled. It is one of the greatest books I have ever read about the mysterious source of creativity. He chose six writers and poor Jane Austen—I say poor Jane Austen, since she’s on the English pound note—just scraped in. It was on account of writing Mansfield Park. However, something I learned when I was young from that book hit home, and that is a long time ago by the way. He said that the writer is storyteller, teacher, and enchanter, but he rated enchantment as the most supreme of all. In that I would totally agree with him.

There is a notion out there in the big world and frequently in the cool world, if you will forgive the cliché, that writing is elitist—writing isn’t elitist, it is the deepest thing we have. It is as essential to us as our breathing. It brings other worlds, other pain, other grief, other humanity, other enigmas to us through language. Writing is the Golden Fleece and we should never forget that.

Now enchantment is inchoate; it means different things to different people. Frank Sinatra crooned about it, flappers danced to celebrate it, and lovers, as Shakespeare knew better than anyone, wrote importune odes on trees. For me, the prerequisite of enchantment is thralldom and permanence.

With thralldom I am lost in a singular way, lost in the depth and vibrancy of the prose, in the escalations and epiphanies and even sometimes carried away, as in the case of the great William Faulkner, whose biblical language occasionally gets the better of him. The most important thing of all that a book or even a fragment of a book, or a poem or a drama, imparts to us is its permanence. Yes, life is short. We don’t know of our hereafter “from whose hilly bourne no traveller returns to tell us the way.” But I have a feeling or a theory or perhaps it is a wish that language lives longer than people. And therefore, its permanence is vital; it is a transfusion of thought from one generation to the next. It is immortal.

I wish to say I come from a country with whom I have not always had an easy relationship. It was thorny. I had offended without intending to. I had possibly broken some patriarchal taboo about what women should write, that is if they should write at all. Yet, I am glad to have come from Ireland, both for the richness of language and the conflict that it bred in me. The most insightful thing I have ever read about Ireland was written by W. H. Auden upon Yeats’s death: “Mad Ireland hurt him into song.” That is some legacy to have.

And in conclusion I want to loudly thank PEN America for this award. I haven’t had many, but now I can add this glowing tribute to the flyleaf of my next book. I’d like as well to thank those behind the scenes, who work tirelessly for PEN, my fellow writers, and everybody involved in making this a cordial and memorable evening. And who is the last person I’d like to thank . . . well let me think. You see I’m scattered because I am happy. Oh yes, all of you here!

Watch the full video from the 2018 Literary Awards Ceremony here »