Don’t Spy On Us Raises Concerns on Emergency Surveillance Legislation 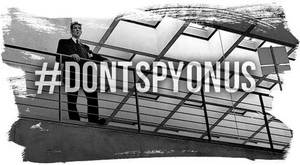 This week, legislation will be rushed through Parliament that includes new surveillance powers affecting every citizen in the United Kingdom. English PEN has joined its partners in the Don’t Spy On Us campaign to raise concerns about the lack of scrutiny and debate.

While the government claims that the legislation does no more than continue the status quo, a detailed briefing sent to MPs by Liberty, English PEN, and its partners in the campaign, makes clear that the bill contains new and unprecedented powers which will expand the scope for existing mass interception.

The bill will allow the government to continue to mandate blanket retention of communications data within the UK for 12 months. This is in direct contradiction of a European Court of Justice judgment, delivered in April, which held that blanket indiscriminate retention of such private data breached human rights. It will also give the government the power to require overseas companies to comply with interception warrants and communications data acquisition requests and build interception capabilities into their products and infrastructure. These provisions will expand existing mass interception powers that are being challenged in the British courts this week.

The bill is due to receive Royal Assent and come into force before the summer recess.

The briefing document is available for download as a PDF.