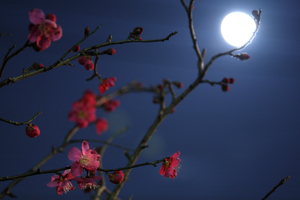 This piece was read by Fedor Alexandrovich at the opening night of the 2015 PEN World Voices Festival. The theme of the night was “the future is now,” and leading writers from around the globe were asked to present their worst- and best-case scenarios for where the world may be in the year 2050.

Everyone wants to hear about the future, and I will again blabber about sex. But frankly, I’m just more interested in it.

So allow me to tell you a little story. We—the redhead, the brunette, the blond man, and I—spent the whole evening together. And then, that quiet blond man said . . . “Let’s go for a walk—naked.”

It was not a joke. We undressed and left the house. The brunette took an umbrella with her, although it wasn’t raining that night.

I don’t know what the people on the street thought of this. We did not think. We were young and beautiful. We were putting on a show for the moon.

We went through the forest, along the abandoned tram tracks. Rusty, they lay in the grass, covered in rotten leaves. Sometimes our feet would touch the cool metal. Shadows of branches embraced our bodies, like birds landing and taking off from our bare shoulders with every step.

The moon rose, and we came to a clearing where we stopped. Here we sat in a circle. The night was not cold and the stars were watching us. We looked at the stars the same way the reptile, our ancestor, looked at them. Just like the reptile, we didn’t need words. Thoughts, like bodies, are varied and unique, and there is nothing better than seeing bare thoughts in a bare body.

We heard breathing—someone had followed us—and the abandoned track started to ring.

A dark figure was approaching, but as the moonlight uncovered it, we realized we were safe. A deer.

We sat still and she came closer, her warm nose nuzzled our tense bodies. The stars were watching her as well. She nestled against our bodies, and we against hers. I lay on my back and drank of her milk—the moon’s milk.

Then it was time to go.

I gestured silently where we would go next. To see my grandfather’s white car, which was 90 years old—a “1961 Moon.”

For years now, it has stood idle and grows rusty. Its door doesn’t close; the steering wheel is silver and skinny. The car is completely covered in poems, handwritten by my grandfather. In those days, people wrote poems in letters, not thoughts.

The seats in the Moon convert into one solid leather sofa. And I could feel everyone’s bodies pressed against it.

The redhead, for some reason, thought of dogs; the blonde man thought of etching techniques, and his extremely beautiful hand ran over the sofa. He felt its depressions, which reminded him of plowed land.

The brunette, on the other hand, thought of nothing; she only trembled, because the leather cover was cold.

The Moon had been waiting there for us and it promised us a long journey—one from which our bodies would hurt.

The journey to your other self, which is always sex.

A silver deer pranced on the hood, because the old car rocked like a cradle, non-stop.

We imagined ourselves as people of the past, divided between God and the beast, whose life was created with words—a falsehood, the most evil: literature.

Because when you’re in the arms of a man or a woman making love—it’s better than any words composed of letters.

Then I said—not with a thought, in words—the new name, and everyone left, kissing me on the lips.

The blonde man covered me with an old blanket.

I said a word; I said a poem; I said a name, because inside of me a new life appeared.

Now men bear children just like women do. And there is a word, in the beginning, a human’s name.

And I heard how my lovers were leaving and I knew that they would make love again. I was no longer looking at them through the glasses of my heart, rather I looked into myself to hear the other heart, the new heart that started beating within me.

And I started this journey.

The moon trip, the journey of being pregnant, which my daughter will continue, that will wake up the dead. She will read the white letters in the black book of earth—the words of their bones—and she will return them names, she will bring them to life, and people will stop dying, just like right now they don’t kill each other, don’t fight wars, because why do you need wars if you can hear thoughts and you can not lie? Lies lead to corruption; corruption to violence; violence to war; war to arrogance; arrogance to lies. And this is the circle of death.

I saw someone look into the window. I opened the door. It was the deer. She squeezed in the car and sat down at my feet, near the strange wheel that looked like a bicycle wheel. The deer said, “We are people. We have stepped out of the circle of death. We are the beings who arrived because we had the glasses of the heart. This instrument sees the world of the other, it lets us read the thoughts of others.”

Then she shyly asked, just like a deer would, “Do you need me to drive you home? My name is Dianna. How’d you like my milk?”