Deer in the Woods 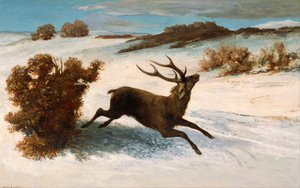 This week in the Guernica/PEN Flash series, we feature a piece by Amanda Michalopoulou.

Subscribe to the series and get new flash delivered to your inbox twice a month—no spam or news, just stories.

We fell asleep in the car, my brother and I. I slumped on his shoulder as we bumped along the dirt road. We had started our journey that afternoon from the outskirts of Karlsruhe. Our destination was a restaurant on the other side of the French border. The air smelled of dung. The trees shone iridescent in the moonlight. A chateau with windows ablaze could be spied in the distance.

Our hosts were participating in an exchange program with the German School of Athens. They were putting us up for a week, just as we had put up their kids. The German kids wouldn’t stop talking to their parents about Mycenae, our climb up the Acropolis rock, and the night of traditional music at the Herodus Atticus Theatre. The Germans were eager to reciprocate. On our very first night, we were visiting the chateau restaurant. Like all restaurants on the border, it had been influenced by the cuisine of both countries. It even had a Michelin star.

My brother was intrigued by unusual flavors. I, on the other hand, wasn’t. I was fourteen: I subsisted on burgers and pasta. As soon as we set foot on French soil, I decided that there, at the chateau, I would try something new.

They took our coats at the entrance. The German kids—I no longer remember their names—knew how to behave. We copied them. We crossed a wood-paneled corridor and were led into a large, swanky room. If only we could always live like this, I whispered to my brother. He squeezed my hand in his. He loved extravagance as much as I did. Europe, back then, was for us a fool’s paradise of museums, grassy meadows, exotic foods.

The lighting made the roses on our table look like they had been sculpted. Around our plates was arranged a profusion of fine cutlery. We were seated on bergères. Their backs were framed by velvet wings and we had to lean forward in order to see anything beyond our seats: the elegance of the waiters’ gestures; the patrons chatting sotto voce, glass in hand.

We were served an onion pie as light as puff pastry. In between the first and second course, even we, the children, were given small glasses of unfermented wine. My brother ordered lobster thermidor; I, venison in a blackberry coulis with roasted pear. I had never tasted anything as delicious. I really, really have to try new things every now and then, I thought to myself.

All the others sang the praises of the house specialty: frog legs. They floated like little chicken drumsticks drowning in sauce. I refused to try them. There was a line I just couldn’t cross. It was impossible for me to eat an animal when it kept its likeness (a chicken or a whole fish). I explained my theory about the head, about the animal’s contours—how they made death palpable and unseemly.

Our host, who, as I found out later, was steeped in irony, remarked that my method of self-protection was ethically reprehensible. I don’t know how exactly he put it to make himself clear to us kids. The gist was that if you care about animals, you don’t make exceptions. He told us about a research study on happiness conducted that year in North and Central Europe. Participants had to answer the question “What, for you, is the clearest image of happiness?” Most of them answered, “Deer in the woods.”

“You therefore ought to put some thought into what happiness means to you,” the German said turning towards me, ”Deer in the woods? Or deer on the plate?”

I dropped my knife and fork. The German started laughing, and urged me to continue eating. His wife told me to ignore his odd sense of humor, but it was too late. In my mind’s eye I saw the butchered deer shake off the pears, magically join together their sundered parts, and come back to life. They flew over our table like the reindeer of fairy-tales. They leaped through the castle windows, shattering them to smithereens. As they passed, they tore off the velvet curtains, which unfurled behind them like capes, and were lost in the darkness. My brother must have been thinking something similar. We looked at each other. We both realized that the truth is found in the overturned table; in the rustle of a curtain; in the deer, blinded by fear, that flee out of reach, far away, and so, by the mere fact of their existence, afford us humans comfort and joy.

Now that my brother is no longer alive, my memory often confuses his image with that of deer. That night they flew over my head, galloping toward some unknown woods that I wouldn’t be able to describe because I didn’t see them. It was late when we left the restaurant. The darkness blotted out our surroundings. Fog enveloped the Germans’ car and was threatening to swallow us.