DARE: CNN’s Acosta: I’m Worried Trump’s Rhetoric Toward Media ‘Will Result in Somebody Getting Hurt’ 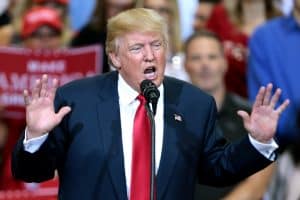 As another Trump rally features crowds calling journalists traitors, CNN reporter Jim Acosta, a target of the invective, warns of the dangers from hostility toward media fueled by the president and some conservative media. Also evident at rally are supporters of the baseless conspiracy theory known as QAnon. Facebook says it has identified a political influence campaign possibly intended to disrupt the midterm elections. Gun rights activists post downloadable blueprints to create 3D plastic guns to the internet, after a judge temporarily stops a company that sought to do so, by invoking First Amendment rights. –Dru Menaker, Chief Operating Officer

CNN’s Acosta: I’m Worried Trump’s Rhetoric Toward Media ‘Will Result in Somebody Getting Hurt’
Acosta posted a video from Trump’s rally in Tampa, FL, showing supporters shouting down members of the press. At one point, one man in the crowd looks into the camera and yells, “stop lying.” Trump has made his ongoing feud with media outlets that cover his administration critically a centerpiece of his brand of politics.
THE HILL

What is QAnon? Conspiracy Theorists Showed Up to Support Trump at a Tampa Rally
QAnon, a sprawling right wing conspiracy theory which alleges, among other things, the existence of a top secret child sex trafficking network run by senior Democrats. It emerged last year on the 4Chan messaging board, when an anonymous commentator began posting cryptic messages.
NEWSWEEK

Facebook Identifies an Active Political Influence Campaign Using Fake Accounts
Facebook said that it had identified a political influence campaign that was potentially built to disrupt the midterm elections, with the company detecting and removing 32 pages and fake accounts that had engaged around divisive social issues. Despite Facebook’s efforts, stopping coordinated influence campaigns has proved difficult.
NEW YORK TIMES

Judge Blocks Release of Blueprints for 3D-Printed Guns
A federal judge stopped the release of blueprints to make untraceable and undetectable 3D-printed plastic guns as President Donald Trump questioned whether his administration should have agreed to allow the plans to be posted online. Outrage over the administration decision is putting gun control back into the election-year political debate, but with a high-tech twist.
AP NEWS

Google is Reportedly Planning a Censorship-Friendly Search Service for China
Google yanked its search service from China in 2010 in the face of pressure over censorship, but now the publication reports that it has developed a censored version that could launch in the country in six to nine months. The alleged product would block Western services already outlawed in China, as well as sensitive search terms.
TECHCRUNCH

The Death of Objective Journalism, Freedom of Expression in Pakistan
“The mainstream media do not discuss social issues or the marginalization of the country’s minorities, as they have been taught that highlighting these issues is equivalent to defaming the country. For many Pakistanis the mainstream media have lost their credibility, and they are turning toward online and social media for news.”
ASIA TIMES

Kenyans on Twitter Protest Suspension of Influential Blogger, Nyankundi
Kenyans are upset over the suspension of the Twitter account of an influential blogger, Cyprian Nyankundi, who has garnered a huge following for exposing illicit government officials and deals. Nyankundi, who calls himself the ‘Boychild president’ on Twitter was suspended on Monday.
AFRICA NEWS

Tommy Robinson Bailed After Court of Appeal Win
Far-right activist Tommy Robinson has been bailed after winning an appeal against a contempt of court finding. A statement from Robinson’s solicitors said: “The rule of law and right to a fair hearing are fundamental to every individual and this ruling is an example of the safeguards of our system.”
BBC NEWS