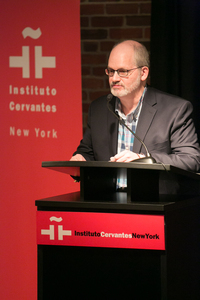 This tribute was written by Daniel Shapiro. He is a poet and author of The Red Handkerchief. He is also the translator of Tomás Harris’s Cipango et al., and editor of Review: Literature and Arts of the Americas.

I met Edith Grossman and got to know her through my work in the Department of Literature at the Americas Society—first as an assistant, then as managing editor of Review magazine, finally as Director of the Department of Literature and Editor of Review—a combined tenure that lasted 30 years (1985–2015). My initial contact with Edie was from a distance, by reading her masterful translations of classic works by Latin American writers—beginning with García Márquez’s Love in the Time of Cholera and including many other iconic and emerging writers from the Hispanic literary tradition such as Carlos Fuentes, Mayra Montero, Antonio Muñoz Molina, and Mario Vargas Llosa.

Our association developed more professionally when I invited her to participate in public literature programs at the Society—including as moderator and translator for a Chilean literature event in 1990; in presentations that included Colombian author Alvaro Mutis—whose Maqroll novellas she translated so poetically; and in other events over the years, among them a Mexican writers series in which she delivered a fiery reading with poet David Huerta; and a Cuban literature series at the Kaye Playhouse at Hunter College. In 2003, I was proud to present her in a lecture on her lauded translation of Don Quixote; and, some years later, in a conversation with Mario Vargas Llosa after his receipt of the Nobel Prize for Literature. Most recently, she delivered eloquent and personal eulogies to late author Carlos Fuentes and translator Alastair Reid in memorial events for those two giants of Latin American writing.

Edie has been a frequent contributor to Review—the major U.S. forum for Latin American literature in translation—since before my time, beginning with her translation of Macedonio Fernández’s “Surgery of Psychic Removal,” in Review 10, in 1973, and of texts by many other authors through the years. During my ongoing tenure with Review (which now continues in a new venue at The City College of New York), it has been my pleasure to continue her long history with the journal by commissioning pieces from her that have included translations by writers such as Santiago Roncagliolo, a memorial piece on Álvaro Mutis, and a text on Nicanor Parra marking his 100th birthday. Not to mention assigning her published translations of works by Fuentes, García Márquez, Vargas Llosa, and so many other Latin American writers for review in the journal, most recently of Sor Juana Inés de la Cruz’s selected poems.

Outside the Americas Society, Edie encouraged my own translation of Cipango, a seminal poetry collection by Chilean poet Tomás Harris; and, once the book was published in 2010, reviewed it favorably in The American Poetry Review. I’ve also had the opportunity to spend time with her socially—discussing literature, politics, and “times gone by” and to come over bottles of Marqués de Cáceres in her cozy yet spacious apartment; or over a meal of steamed mussels at her favorite restaurant on the Upper West Side. In all of our encounters, she has been at once Edith Grossman the renowned translator, and also just plain Edie, honest and warm, one of the most authentic people I’ve had the good fortune to meet and get to know. It’s an honor to have shared these experiences with Edie, who has been both a mentor and an inspiration as well as a friend.

Here’s to future collaborations and more good times with her in the years to come!