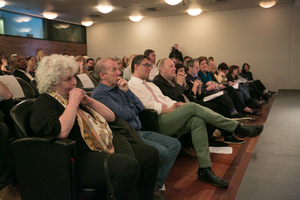 This tribute was written by Daniel Halpern. He is the publisher and editor of Ecco Press/HarperCollins. He is a poet and author of Something Shining.

To my mind and ear, Edith Grossman is the finest translator from the Spanish. That’s why I kept her on the phone until she agreed to translate Don Quixote. It took a while. She said, “I couldn’t possibly.” She said, “It’s too long.” She said, “It’s not contemporary Spanish and I’d have to learn it.” She said, “You can find someone else to do it.” I stayed on the line and told her how much I loved her Márquez translations, that only she could deal with the episodic nature of Cervantes’ great novel. I told her I would not ask anyone else. I asked her to name her price. She refused. I asked her again to toss out a fantasy number and, as I remember it, she threw out some modest figure and I doubled it. She thought I was crazy. You have all read her translation. The only possibly crazy party, as far as I’m concerned, is the wonderful (in Edie’s English) Señor Quixote.