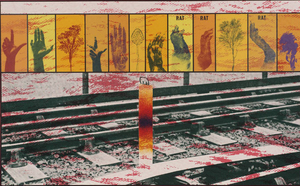 This week in the PEN Poetry Series, PEN America features a new poem by John Ashbery.

When she transferred in 1920,
that treasure of the wild,
Blanche Thompson who was there,
they followed, and just seemed as anything saucy.

On the other hand, someone
as old as he is gilded both lily and pill,
some Baltic-flavored embassy.
I’ll talk about it now and
we’ll see later. Lives gone on here yet…
That burns me up.

No sleep yet.
Each fiscal year
without all these images, a waking figure
built the comfortable arena.
I don’t remember the date on those.
I remember a sweet little man-announcer.

Not blind, but what is?
The fox ran
for her to get out from under the covers
on the same button!

His mother passed away,
cold errant,
in the cardboard container,
going begging
with a good shiny pen.
See what was so good about it.