Confronting a Culture of Impunity 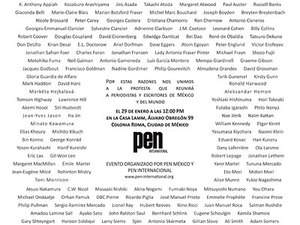 Mexico has become one of the most dangerous countries in the world in which to be a journalist, which means that all Mexican writers and journalists face the spectre of intimidation, not to mention the sorrow and anger of fellow citizens. Earlier this year, we published the fierce cry, “Enough!” from the Mexican poet, Javier Sicilia, whose son was murdered, almost incidentally it seemed, because of the drug wars.

And yet, despite promises and legislation, and a Special Prosecutor devoted to this problem, the killings do not stop. The culture of impunity in Mexico, something PEN has been specifically campaigning against for ten years, ensures that there are few arrests and few prosecutions. This also means that the scandals of corruption and the insidious influence of the drug cartels are underreported and thus unchecked.

It has been difficult for our colleagues in the three centers in Mexico to confront these issues. But a few months ago, PEN International began working with PEN Mexico on the idea of an event in Mexico City, during which the community of Mexican writers and journalists would be joined by the global PEN community, to say, once again, Enough!

The result is PEN Protesta! which takes place at noon, on Sunday, January 29th in Mexico City. Writers from USA, Canada, England, and Japan will stand on a stage with distinguished Mexican writers and journalists. We each have one minute to speak, no more than 200 words.