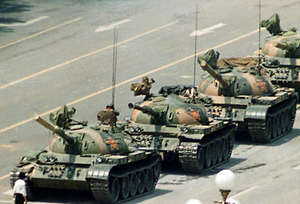 This statement was released by PEN International on June 2, 2014.

Twenty-five years after the brutal suppression of protests in Tiananmen Square and other cities on June 4, 1989, in which an estimated 2,000 unarmed individuals were killed by Chinese troops, the climate for free expression in China remains stifling and scores of writers are being arrested, PEN International said today.

“Tiananmen Square casts a long shadow on freedom of expression in China,” said Marian Botsford Fraser, Chair of PEN’s Writers in Prison Committee. “Not only is the tragedy itself a suppressed piece of history in China, but many of those who protested twenty-five years ago are still being imprisoned, harassed and silenced.”

The worldwide association of writers is calling for the release of all writers in prison in China who are held solely on account of the peaceful exercise of their rights to freedom of expression, association, or assembly, and an end to the harassment, trials, and censorship of those who dare to speak out.

Writers held include 70-year-old journalist Gao Yu, who was arrested on April 24, 2014, and was held incommunicado for two weeks before the authorities disclosed, in a televised ‘confession’ feared to have been made under duress, that she was being held on suspicion of ‘leaking state secrets abroad’.

Gao Yu was first arrested on June 3, 1989, for writing an article in support of the pro-democracy protests. She was one of the first people to be detained in the crackdown on the June 4 movement, and spent a year in jail, followed by a further five and a half years behind bars from 1993-1999.

According to PEN International’s research, there are currently at least 40 writers and journalists detained in China, a number which has remained largely unchanged for a quarter of a century. Sentences range from three to 20 years, with the majority of cases serving sentences of over five years. Prison conditions are poor, with high levels of ill-health, a lack of access to medical care and family visits, and widespread torture or other ill-treatment of detainees and prisoners.

The legislation used to silence dissent has evolved over time, Notably, the rise in the use of the internet and corresponding government surveillance and suppression of the electronic media and has led to a corresponding rise of bloggers and social media users being arrested – most held under subversion or state secrets laws.

Members of the Independent Chinese PEN Center (ICPC) are amongst those to be targeted. The former ICPC President and Nobel laureate, Liu Xiaobo has been behind bars since December 8, 2008, serving an 11-year sentence.

His wife Liu Xia has been held incommunicado under strict house arrest at her home in Beijing since 18 October 2010 and is denied any contact with the outside world. Concerns for her welfare and psychological integrity are acute. Her situation highlights the increasingly widespread use of extra-judicial or ‘soft’ detention, in which government critics are subject to arbitrary arrest without charge, abduction, assault, and intimidation.

Uyghur writer, academic, and Uyghur PEN member, Ilham Tohti, was arrested on 15 January 2014 in Beijing and formally charged with “splittism” on February 20, 2014, amid a crackdown on members of China’s Uyghur minority who are critical of the government. Ilham Tohti has been a target of frequent harassment by Chinese authorities for his outspoken views on Uyghur rights since he established Uyghur Online in 2006. If convicted, he could face life in prison, or even the death penalty.

More recently, Xin Jian, a Chinese employee of the Japanese news bureau Nihon Keizai Shimbun who worked in its Chongqing bureau, southwestern China, is reported to have been arrested. Her family is reported to have said that she was detained on suspicion of picking quarrels and provoking troubles.