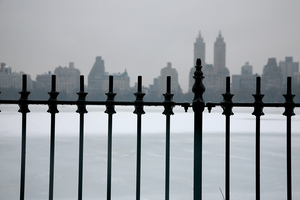 This week in the Guernica/PEN Flash Series, we feature a piece by Randall Horton, who participated in this year’s PEN World Voices Festival. Subscribe to the series and get new flash delivered to your inbox twice a month—no spam or news, just stories.

Answer the phone at 10:00pm EST. Offer a reserved hello on a nebulous night filled with pallid snow in Harlem. Be attentive when you learn he died in a hail of gunfire at the intersection of Minnesota Avenue and East Capitol Street in the nation’s capital. Hang up. You can and you can’t believe the truth. Write D-I-S-C-O in your leather journal. Maybe this will immortalize the image. You will never forget him, but you have already forgotten Hook.

Remember the cell doors opening after being closed for 18 months in Fairfax County Adult Detention Center. Five hours after that release you met Disco wheeling an ATM through your basement on a handcart. Out of the wall with metal chain and pickup truck he pulled the money machine. He did that. This was your introduction.

Turn on the computer. Type Theodore Blanford in the search box. Click the magnifying glass. Expect to be surprised even though you know what the results will bring. Don’t be surprised when you scroll to MARYLAND DOUBLE HOMICIDE SUSPECT SHOT, KILLED IN DC. One lone bird outside your window flies backwards at an indeterminate rate of speed while the world moves forward. The bird is red. Look for balance in the oddity. Note double-homicide is five syllables. Five deliberate pauses before damn. Remember you knew the suspect/shooter/killer. Suspend court in your imagination. Add four indeterminate words to formulate the phrase hold court in the streets. This is how he will die: holding court in the streets. Prophetic. After reading the now-deceased wife wanted a divorce, deduce it was because of drugs. Visualize the wife and sister just before death in their doublewide. Try to make sense of blood spilled on the carpet. The red is deafening. Scream. Wait for the buzz to stop because someone rung the wrong buzzer. There is always an echo after the buzzing. Even after it buzzes again, don’t answer. Keep reading the online article, specifically the phrases “forcible entry” and “protective order.” Acknowledge your friend was a suspect in his first wife’s murder, too. A dead body in the trunk.

Two days later while driving to New Haven to teach two classes, call Greg because it takes that long to find someone to talk about tragedy. Tell Greg, who is a barber and has ten years behind the razor wire tucked in his memory, what happened. Agree in unison prison will turn the brain into a hum. Agree again prison taught you to be a better criminal though you both digress. Both of you understand the term “anomaly” but admit Disco is a composite of many men who never learned to be a man. You will then ask the question for the first time. Why?

Teach The Black Arts Movement: Don’t Cry, Scream! and Poetic Form at the University of New Haven in Connecticut, return back home to Harlem, New York, before rush hour traffic bottlenecks the Cross County Parkway. Dig through the closet for the first version of your hope-to-be-published memoir. Disco rolled the safe out of the department store, the first lines of the paragraph read. Go to the next page to where he loves to pull the trigger of a gun more than he loves touching the torso of a woman. Flip to the page where Disco and his sister appeared at the right side of the car where Randy sat and fired, in rapid succession, eight gunshots into the windshield, the red and blue flames punctuate each shot fired. The body a question mark.

He tried to run over the wife with his truck and then threatened her with a claw hammer. She told the police. Ask yourself why this sign didn’t signify violence. What theory would Ferdinand de Saussure classify this as? Put the manuscript back in the closet. Don’t beat yourself up because you knew he was a killer and said nothing to nobody. Justify your silence. That’s why they called you Hook. Don’t block Audre Lorde’s your silence will not protect you from your mind. Pretend this is penance.

Wake up the next morning. Go back to the computer. Press any key to erase the black screen. Ignore the blackbirds outside your window while telling yourself this is the last time. Click INMATE VIOLENT DEATHS IN THE NEWS. A flutter of blackbirds appear suspended in animation at the top right corner of the webpage, ignore them but then don’t. Tell yourself this is not karma. He didn’t want her to leave. She wanted him to go. Said he needed treatment. Think back to 12-Step Literature, which cautions of the 13th Step, meaning: sexual fraternization with people inside the circle. Feel confident in assuming she was a recovering addict and understood addictive behavior. Two addicts don’t make a right. Tell yourself this.

Review the interaction with police who failed to notice the inevitable. Admit the judicial system is failing to protect women. I AM VICTIM was tattooed on her forehead, yet she remained invisible. Ask yourself, does his death matter more than the victim’s death? Convince yourself the race never stops running, that memory will eat you alive. Say I am a changed man but no one will hear you. Get back in the bed. Pull the covers over your face. Remember to dream. Forget Hook. Wake up tomorrow and feel guilty again.

A slightly different version of this piece is forthcoming in Randall Horton’s book Hook: A Memoir through Letters (Augury Books, 2015).