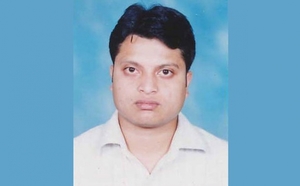 The murder today of Bangladeshi writer, editor and blogger Ananta Bijoy Das is deeply shocking, PEN International said today. Das is the third secular blogger to be murdered for his writings by religious extremists in Bangladesh this year. The organisation calls on the Bangladeshi authorities to swiftly and impartially investigate his death and ensure that the perpetrators are brought to justice.

‘There is a deepening pattern of violence against writers and journalists in Bangladesh, who appear to be targeted solely for the peaceful expression of their views. The authorities must take urgent steps to bring those responsible to justice, and ensure that others who may be at risk are adequately protected.’

Bijoy Das was stabbed to death by a masked gang wielding machetes in the city of Sylhet on May 12 2015. Prior to his death, Bijoy Das had received a number of death threats from Islamist militants. His name had appeared in two assassination lists published in the Bangladeshi media, alongside those of other secular bloggers described as anti-Islamic and blasphemous.

In February and March 2015, two other distinguished bloggers, Avijit Roy – a close friend of Bijoy Dash – and Washiqur Rahman were also brutally murdered. A militant Islamist group has reportedly claimed responsibility for Roy’s murder, which took place on February 26. An Islamist has been arrested over his murder, while two students from an Islamic school (madrassa) have been arrested in connection with Rahman’s killing.

Bijoy Dash had been in hiding ever since Roy’s murder, and had been accepted last month for placement by the International Cities of Refuge Network (ICORN). In April 2015 he had been invited to Sweden to give a talk by Swedish PEN, but on 22 April the Swedish embassy in Dhaka refused his visa application.

Ananta Bijoy Dash was also an editor of a quarterly magazine called Jukti (Logic) and headed the Sylhet-based science and rationalist council. He was awarded the Mukto-mona Rationalist Award in 2006 for “his deep and courageous interest in spreading secular & humanist ideals and messages in a place which is not only remote, but doesn’t have even a handful of rationalists.” His work focused on rationalism, atheism, and science, with a particular focus on biological evolution. He also wrote blog posts that criticized some aspects of Islam and also of Hinduism, as well as a poem eulogizing the renowned Bangladeshi secular writer Taslima Nasreen, who fled to Europe in 1994 after threats to her safety by Islamist extremists.