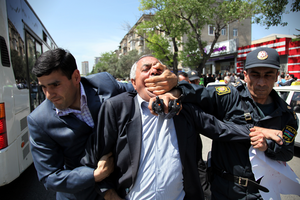 The Guardian reported that chief sports correspondent Owen Gibson’s application for press accreditation, submitted in January, was denied today just three hours before his scheduled flight to Baku to cover the games, which open on Friday.  Gibson had previously met with government critics including Khadija Ismayilova, the jailed investigative journalist and winner of the 2015 PEN/Barbara Goldsmith Freedom to Write Award. Shortly after Ismayilova’s December 2014 arrest, Gibson wrote an extensive story detailing Azerbaijan’s wave of human rights abuses ahead of the Games.

In April, the Azerbaijan Foreign Ministry issued foreign press accrediation rules for the games, stating that accreditation can be cancelled if foreign media representatives carry out any activity against the territorial integrity, independence and sovereignty of Azerbaijan, or visit the occupied lands of the country. Earlier this week, London Platform campaigner Emma Hughes, who had received press accreditation for the Games, was detained at Baku airport and deported. An Amnesty International delegation was similarly forced to cancel a scheduled visit to Baku after the Azerbaijan Embassy in London reportedly told them this week that “Azerbaijan is not in a position to welcome the Amnesty mission to Baku at the present time” and that the visit should be postponed until after the European Games.

“Azerbaijan has thrown its own independent journalists behind bars and is now barring the entry of foreign journalists, in a desperate effort to hide its human rights abuses from the world,” said Karin Deutsch Karlekar, director of PEN’s Free Expression Programs. “European leaders should insist that their journalists be given the same warm welcome that their athletes are receiving, or risk being seen to condone President Aliyev’s utter contempt for free expression.”