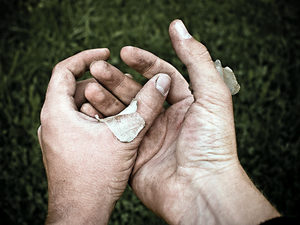 This week in the Guernica/PEN Flash Series, we feature a piece by Kaitlyn Greenidge. Subscribe to the Series and get fresh new stories delivered to your inbox twice a month—no spam or news, just stories.

“So my brother Pete was chopping wood yesterday and the axe slipped. His hand slipped right over the blade,” Nick wiped his nose, “You should have seen it. There was blood everywhere. He got an axe wound on his finger.”

“He got a what?” Carlos said. He was smiling. All the other guys who were listening in started smiling, too.

Nick smiled back at them, nervously. “A cut from an axe,”

Carlos was bigger than Nick. He was bigger than all the other guys there. This was Carlos’s third time in seventh grade. It was only Nick’s first. Nick knew that should mean he was smarter than Carlos but it never seemed to turn out that way.

“No,” Carlos said. “Not like that. You didn’t say it like that, like ‘a cut from an axe’. Say it like you said it before.” Carlos’s voice was trembling. He flickered his eyes to the other guys’s faces.

“My brother Pete has an axe wound on his finger,” Nick said, slowly, unsure.

Carlos and all the other guys busted out laughing. They laughed long and hard. They said, “axe wound, axe wound” until Nick started to laugh with them.

“Yeah,” Nick said. “An axe wound. My brother got an axe wound on his finger,” and that made them all laugh harder.

He didn’t look it up until he was home. Before dinner, when he sat next to Mom and Dad and Pete on the couch, watching TV. He took out his phone and typed in the words. It took four tries before he got a definition. Axe Wound, Urban Dictionary said. Daddy word for a vagina when talking to his young son. Words related to Axe Wound. Pussy. Cunt. Vag.

Nick closed the screen. He looked up at Mom. “Carlos,” he said.

She pursed her lips.

It was pork chops and applesauce night. Mom served Pete, on account of his wound. She put a pork chop on his plate and cut the meat into dozens of small, square pieces. When she was done, she reached across the table and carefully set Pete’s plate down in front of him.

Pete’s wounded hand was wrapped in thick white gauze. It was now a cumbersome thing, no longer nimble, only a stub. Imprecise. Pete’s veiled right hand nudged his spoon into his left one, and with this naked, unfamiliar hand, he brought the meat up to his waiting, open mouth.

Nick looked down at his own plate. An axe wound on a finger. He still didn’t think it was that funny. Why imagine that unimaginable organ, reduced to a scrap and misplaced on a throwaway digit, wrapped up in ace bandages, useless and bulky and random?

More and more, all the guys he knew were speaking in a code that, even when Nick deduced its meaning, still didn’t make any sense.

Words were too dense now. They sat thick on tongues. You had to figure out the right way to say them or you’d choke.

Nick remembered his own voice now, as sweetly high-pitched as a gaggle of wind chimes, singing the words out to his crowd of friends. “My brother has an axe wound on his finger.”

Nick blushed at his own purity and he mourned it. He wanted words to mean one thing. His cheeks burned. He knew this was a stupid wish. He was ashamed of it.

Nick looked at the clean white gauze wrapped thick around his brother’s hand, the bandage butterflied with silver claws.

A vagina on a finger.