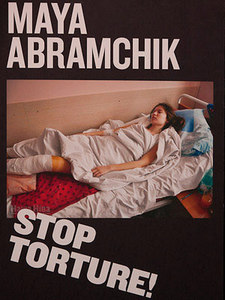 One year ago in the presidential election in Belarus, the country turned against the man who had perverted the democratic republic into a one-man dictatorship. Alexander Lukashenko faced the indignity of a run-off and the possibility of losing. Instead, he called on the state security forces and the army, and that night, December 19, 2010, thousands of peaceful protesters were arrested, often with brutality. Seven of the nine opposition candidates were among them.

Persecution to the point of kidnap and murder had long been directed at open dissent, activism and artistic independence. A year ago, literally overnight, Belarus further regressed into a paranoid police state which sees a potential enemy in every citizen. This former Soviet republic of ten million people wedged between Russia and the E.U. is now a benighted, bankrupt dystopia where ordinary people live in fear of coming under suspicion from a vengeful tyrant.

Meanwhile, outside Belarus, the official world is about to go into seasonal hibernation. The Christmas decorations are up in the marble halls of democracy and no more is expected to be heard from there until next year. The levers of political, diplomatic and economic pressure are set at rest.

This is a letter from a few artists to artists everywhere. As a class, artists have no executive powers but time and again in countries all over the globe it is our voices that have reminded statesmen and politicians of their moral duty to act for the redress of injustice.

In the case of Belarus, December 19, 2011 is such a moment, and we call upon the power of art to disturb the sleep of conscience.

ACT NOW: Visit the Zone of Silence web site to sign the petition.