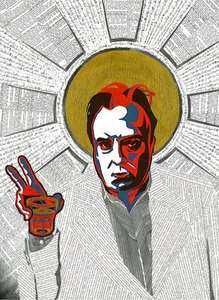 The three names on the dedication page belonged to a Tunisian street vendor, an Egyptian restaurateur, and a Libyan husband and father. In the spring of 2011, the first of them set himself alight in the town of Sidi Bouzid, in protest at just one too many humiliations at the hands of petty officialdom. The second also took his own life as Egyptians began to rebel en masse at the stagnation and meaninglessness of Mubarak’s Egypt. The third, it might be said, gave his life as well as took it: loading up his modest car with petrol and homemade explosives and blasting open the gate of the Katiba barracks in Benghazi—symbolic Bastille of the detested and demented Qadafi regime in Libya.

In the long human struggle, the idea of “martyrdom” presents itself with a Janus-like face. Those willing to die for a cause larger than themselves have been honored from the Periclean funeral oration to the Gettysburg Address. Viewed more skeptically, those with a zeal to die have sometimes been suspect for excessive enthusiasm and self-righteousness, even fanaticism. The anthem of my old party, the British Labour Party, speaks passionately of a flag that is deepest red, and which has “shrouded oft our martyred dead.” Underneath my college windows at Oxford stood—stands—the memorial to the “Oxford Martyrs”: Bishops Cranmer, Latimer, and Ridley, who were burned alive for Protestant  heresies by the Catholic Queen Mary in October 1555. “The blood of the martyrs is the seed of the church,” wrote the Church Father Tertullian in late first-century Carthage, and the association of the martyr with blind faith has been consistent down the centuries, with the faction being burned often waiting for its own turn to do the burning. I think the Labour Party can be acquitted on that charge. So can Jan Palach, the young Czech student who immolated himself in Wenceslas Square in January 1969 in protest against the Soviet occupation of his country. I helped organize a rally at the Oxford Memorial in his honor, and later became associated with the Palach Press: a center of exile dissent and publication which was a contributor, two decades later, to the “Velvet Revolution” of 1989. This was a completely secular and civil initiative, which never caused a drop of human blood to be spilled.

Especially over the course of the last ten years, the word “martyr” has been utterly degraded by the wolfish image of Mohammed Atta: a cold and loveless zombie—a suicide murderer—who took as many innocents with him as he could manage. The organizations that find and train men like Atta have since been responsible for unutterable crimes in many countries and societies, from England to Iraq, in their attempt to create a system where the cold and loveless zombie would be the norm, and culture would be dead. They claim that they will win because they love death more than life, and because life-lovers are feeble and corrupt degenerates. Practically every word I have written, since 2001, has been explicitly or implicitly directed at refuting and defeating those hateful, nihilistic propositions, as well as those among us who try to explain them away.

The Tunisian, Egyptian, and Libyan martyrs were thinking and acting much more like Palach than like Atta. They were not trying to take life. They desired, rather, that it be lived on a higher level than that of a serf, treated as an inconvenience by a moribund oligarchy. They did not make sordid and boastful claims, about how their homicidal actions would earn them a place in a gross fantasy of carnal afterlife. They did not wish to inspire hoarse, yelling mobs, tossing coffins on a sea of hysteria. Jan Palach told his closest comrades that the deep reason for his gesture was not just the occupation, but the awful apathy that was settling over Prague as that “spring” gave way to a frosty winter. In preferring a life-affirming death to a living death-in-life, the harbingers of the Arab spring likewise hoped to galvanize their fellow subjects and make them aspire to be citizens. Tides will ebb, waves will recede, the landscape will turn brown and dusty again, but nothing can expel from the Arab mind the example and esprit of Tahrir. Once again it is demonstrated that people do not love their chains or their jailers,(1) and that the aspiration for a civilized life—that “universal eligibility to be noble,” as Saul Bellow’s Augie March so imperishably phrases it—is proper and common to all.

Invited to deliver a lecture at the American University of Beirut in February 2009, with the suggested title “Who Are the Real Revolutionaries in the Middle East?” I did my best to blow on the few sparks that then seemed dimly perceptible. I instanced the burgeoning civil resistance in Iran. I cited the great Egyptian dissident and political scientist (and political prisoner) Saad-Eddin Ibrahim, now recognized as one of the intellectual fathers of the Tahrir movement. I praised the “Cedar Revolution” movement in Lebanon itself, which had brought about a season of hope and succeeded in putting an end to the long Syrian occupation of the country. I took the side of the Kurdish forces in Iraq who had helped write “finis” to the Caligula regime of Saddam Hussein, while also beginning the work of autonomy for the region’s largest and most oppressed minority. I praised the work of Salim Fayyad, who was attempting to bring “transparency” to bear on the baroque corruption of the “Palestinian Authority.” These were the disparate but not-unconnected strands out of which, I hoped and part believed, a new cloth could be woven.

It was clear that a good number of the audience (including, I regret to say, most of the Americans) regarded me as some kind of stooge. For them, revolutionary authenticity belonged to groups like Hamas or Hezbollah, resolute opponents of the global colossus and tireless fighters against Zionism.  For me, this was yet another round in a long historic dispute. Briefly stated, this ongoing polemic takes place between the anti-imperialist Left, and the anti-totalitarian Left. In one shape or another, I have been involved—on both sides of it—all my life. And, in the case of any conflict, I have increasingly resolved it on the anti-totalitarian side. (This may not seem much of a claim, but some things need to be found out by experience and not merely derived from principle.) Several of these rehearsals and excursions of mine were discussed in my memoir, Hitch-22, and several of them are reflected here, too, again in reportage as well as argument. I affirm that the forces who regard pluralism as a virtue, “moderate” though that may make them sound, are far more profoundly revolutionary (and quite likely, over the longer term, to make better anti-imperialists as well).

Evolving or honing any of these viewpoints has necessitated constant argument about the idea of America. There is currently much easy talk about the “decline” of my adopted country, both in confidence and in resources. I don’t choose to join this denigration. The secular republic with the separation of powers is still the approximate model, whether acknowledged or not, of several democratic revolutions that are in progress or impending. Sometimes the United States is worthy of the respect to which this emulation entitles it; sometimes not. Where not—as in the question of waterboarding, discussed later—I endeavor to say so. I also believe that the literature and letters of the country since the founding show forth a certain allegiance to the revolutionary and emancipating idea, and in a section on American traditions I try to breathe my best on those sparks, too.

“Barbarism,” wrote Alain Finkielkraut not long ago, “is not the inheritance of our prehistory. It is the companion that dogs our every step.” In writing here, quite a lot, about the examples and lessons of past totalitarianisms, I try not to banish the specter too much. And how easy it is to recognize the revenant shapes that the old unchanging enemies—racism, leader worship, superstition—assume when they reappear amongst us (often bodyguarded by their new apologists). I have attempted to alleviate the morbid task of combat here, by writing also about authors and artists who have contributed to culture and civilization: not words or concepts that can be defended simply in the abstract. It took me decades to dare the attempt, but finally I did write about Vladimir Nabokov. . . .

The people who must never have power are the humorless. To impossible certainties of rectitude they ally tedium and uniformity. Since an essential element of the American idea is its variety, I have tried to celebrate things that are amusing for their own sake, or ridiculous but revealing, or simply of intrinsic interest. All of the above might apply to the subject of my little essay on the art and science of the blowjob, for example, while not quite saving me from the most instantly misinterpreted of all my articles, concerning the humor deficit as registered by gender. Still, I like to believe that these small-scale ventures, too, make some contribution to a conversation without limits or proscriptions: the sin qua non of the sort of society that knows to keep the solemn and the pious at bay.

This book marks my fifth collection. In the preface to the first one, Prepared for the Worst, in 1988, I annexed a thought of Nadine Gordimer’s, to the effect that a serious person should try to write posthumously. By that I took her to mean that one should  compose as if the usual constraints—of fashion, commerce, self-censorship, public and perhaps especially intellectual opinion—did not operate. Impossible perhaps to live up to, this admonition and aspiration did possess some muscle,  as well as some warning of how it can decay. Then, about a year ago, I was informed by a doctor that I might have as little as another year to live. In consequence, some of these articles were written with the full consciousness that they might be my very last. Sobering in one way and exhilarating in another, this practice can obviously never become perfected. But it has given me a more vivid idea of what makes life worth living, and defending, and I hope very much that some of this may infect those of you who have been generous enough to read me this far.

(1) The best encapsulation of the disordered, sado-masochistic relationship between rulers and ruled in a closed society with a One Man regime is provided, as so often, by George Orwell, who in Coming Up for Air wrote of “the processions and the posters with enormous faces, and the crowds of a million people all cheering for the Leader until they deafen themselves into thinking that they really worship him, and all the time, underneath, they hate him so that they want to puke.”