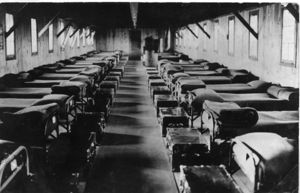 This week in the PEN Poetry Series, guest editor Cathy Park Hong features a new poem by Uljana Wolf, translated from the German by Sophie Seita. About Wolf’s work, Hong writes: “German poet Uljana Wolf nimbly inhabits the boundaries of languages, often interweaving the phonetic utterances and connotative overlaps between German and English. Formally and syntactically, her poems resist stasis: her lines spill into hybrid forms and the ‘voice’ is decidedly imperfect, pocked with silences and joyfully musical errata. It’s only fitting then that the subject of ‘Annalogue on Oranges’ is Bertha Pappenheim, otherwise known as Anna O, Freud’s famed patient who suffered a hysteria that precipitated her loss of ‘linguistic coherence.’ ‘Annalogue’ is anything but a monologue. Like the analog tape recorder, Wolf records the disordered consciousness of Anna O, transforming her voices into energized Steinian meditations on the restriction of institutional spaces (the ward) and female identity. Here, Wolf enacts her own ‘tatting,’ lacing together polyglot lines that are obsessive and glorious.”

when it is time for oranges, ist keine zeit, no time at all, für nichts. i only eat oranges, at least they exist, even if not much else is, no things at all, not much. petite little boats and stringy thin skin! i suck on them for hours. keeps me busy. free run for the tongue, looking for thread between teeth, interlace-space, and rooms to own, not much. oranges or existence all round. oranges or residence all round. with weighty curtains and rooms that step together conspiring, brother, mother, doctor, and the ward, daily a session, that’s how they planned it all, wall to wall around my standstill arms. but oranges exist, as transportation, orange busses, orange trains, over cobbled headstone pavement, rattling through the ages. and on my bed those glimmering signals—peel, swinging segments, white skinned bridges! i lay them out for hours. keeps me going drüber. while the ward brings fresh water fresh sheets, all the unemptied glasses, cups, daily a warding off for repair, nicht wahr, that’s how they planned it all. later ten rooms on each floor, servants galore, with bow and tie marriage and tea. marriage and in the evening a little riot, then tea. but when it is time for oranges, ist keine zeit, no time at all for thirst, für wasser, for being thus arranged. because oranges are their own manoeuvring material. because trains, bridges and little glimmering glitches, keep me going unallayed. go lack go lack use to her. because oranges communicate through the ages. oranges or restricted residence all round. oranges or a rather limited range of vision. oranges or it’s like we’re in prison. just trees and animals, we’re at the Ende der Welt. when it is time for oranges, ist keine zeit, no time at all, for world-endings, padlock-curtains, paper measures for sure. because oranges are centre-residence for life. for a lack, for want, go go be good, of use to her. go sweep the chimney, so that the doctor comes again. that the doctor sees how organs wander. through the ages. that’s what they figured: that they wander and then go astray. get stuck in the body, block vocal tracts, good manner tracts. o range of things. because storage, and organs, organs. because collect yourself, then wander. glimmering bright and lacking. against orderly arrangements. against measures, wall to wall, round my standstill warning. only at first did i snap off buttons from covers and cases. then dropped my cover coherence. a show at tick and loosen loosen it so to speak, sat. wanted to, the cover, come out from under, come out loose, what they call paralysis, i call a tick. a ticking in oranges, through the ages. because i can hear it. where i sit, in my barracks in the forest, my vienna asylum, my tent on the rindermarkt. where i suck it out, for hours, what’s lacking. let the tongue run free, looking for grounds between teeth, rejection, residence, waiting rooms. keeps me beschäftigt. because i not having work, no travel only thought-revel, thought-cuttings. while the ward takes away the peel, their sauer glimmer all over my lack of thirst. nein, i did not pretend. hungerstreik. because oranges are asylum and solid geistig nourishment. glimmering. because one ought to freely choose what one eats, right, packages, laced with marriage, biscuits and tea. haven’t you the faintest, and of that a great deal, when nothing else appeals, no things at all, nicht viel. but brothers and dogs, they too exist, if you can stomach it, as is the custom as many things are. stutter-juice and whoops! open the sluice! when it is time for oranges, ist keine zeit, no time at all, for brothers, who go off to study, or dogs on all fours, mind you, slobbering all over my tray, drinking out of my little cup. naughty pup! oh long black tongue. why ich this knows. sniffing outside, du hund du. snap drank sloppily from little cup, with the dog-tongue, the same indeed freilich thinks often to tame it—dors dors! must i be sick and therefore break? ah no alors! break only rules about drinking, non, only tea-duties and ten-room ditties, marriage, trays, parentage, offspring, and tea. nein, ich have not this thirst, never, nie. that’s what they figured, right, that even a dog has more rights to run free. but that oranges glimmer. that one can with an orange an existence derange and switch track. so as not to be slurped up by dog-tongue. excuse-moi, dog. excuse-moi, docteur. can he not betake himself away and take the warding off, the water, the cups and every wall they mounted round my little bed. you see, oranges solidarise, those round sashaying organs, i join their wanderings. i squeeze and out comes contra-stand:

meaning to have a voice

“Starting from or with an orange, all travels are possible.
All ways of the voice that lead across it, are good.”

you tell me what it means

(dry up in mid-speech

a)  ich have krämpfe in my calves
b)  my teeth klappern

I, a native irgendwas girl

but will try to give as well as a person

between 9 o’clock in the evening

but will try to give as well as a person

when i was circling round the oranges”

island, camp, a glimmer, a glimpse

“when I was circling round the oranges, who paid then?