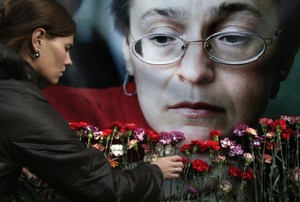 The conviction on Tuesday, May 20, 2014, of five men for the murder of the renowned Russian journalist Anna Politkovskaya is a welcome development, PEN International said today.  However, the worldwide organization of writers remains deeply concerned that those who ordered the killing continue to evade arrest and conviction. Full justice will not be done until those who masterminded the crime are identified, tried and convicted.

“The stature of Anna Politkovskaya grows every day,” said Carles Torner, executive director of PEN International. “She continued her extraordinary work as a writer and as a journalist despite facing incredible danger and hardship until her tragic and brutal death. She understood the true power of words, she served truth, and she did not back down—she is a symbol of freedom of expression against the current trend of repression in Russia. The authorities in Russia must do everything they can to ensure that all those involved in her death face justice.”

PEN has been campaigning for Anna Politkovskaya since she was shot to death for her reporting on human rights abuses and corruption in Russia on October 7, 2006. She had previously been the victim of an attempted poisoning, a mock-execution, and numerous death threats. Her murder bore all the hallmarks of a contract killing.

Politkovskaya worked as an investigative reporter for Novaya Gazeta and was the author of a number of books, including A Dirty War: A Russian Reporter in Chechnya and Putin’s Russia. She was a fierce, vocal critic of President Vladimir Putin, and her fearless exposure of human rights abuses carried out during the Chechen wars made her very unpopular with powerful people in the region.

Politkovskaya often spoke publicly about her fear that she would be murdered, and in 2004 warned us that the Russian authorities were beginning to strangle free expression in the press, creating “an information vacuum that spells death from our own ignorance.”

Over the last year, Russia has been a focus of PEN International’s work. We have campaigned for greater free expression in Russia at the 2013 G20 Summit and at the Sochi Winter Games. We now call on the Russian Federation to demonstrate its commitment to justice and to freedom of expression by bringing to trial the mastermind behind the assassination of Anna Politkovskaya.