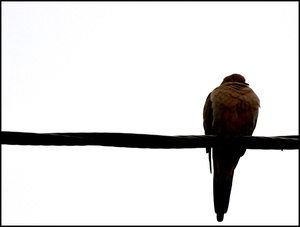 At quarter past five, Amal’s mother took the chocolate cake out of the oven. She carefully smeared the icing on the cake, and then added rainbow sprinkles. She tried to write ‘Happy Tenth Birthday’ with whipped-cream, but her hands trembled with excitement so instead she just drew gentle white flowers.

The flowers were like the crown of white roses Amal always imagined her mother must have worn on her wedding day. But Amal’s mother said Amal didn’t have a father, Amal came to her with a white dove. Even at ten Amal knew this was crazy.

Amal’s mother invited every kid in town, even Yam, the girl who refused to sit next to Amal in math class and told the teacher it was because she was scared to catch “crazy germs.”

“Nobody’s coming, Mom. They all think you have gone crazy,” Amal said when her mother took out the expensive vodka so that the parents could enjoy themselves too.

“Crazy, what a strong word! I have seen crazy back in my day, back in the war—how they put land-mines in the fields where little girls played and sang, girls with their colorful dresses flying like rainbow doves from the explosions.”

At thirty minutes past five, Amal watched her mother get ready for the party. She suddenly didn’t mind that her mother’s lipstick was too red for her age. All Amal thought of was that in the whole world, no one had a mother as beautiful as hers.

“Crazy—let me tell you, you can’t catch crazy, it’s like lady-bugs crawling in the blood. But we need to ignore people like that. You’ll see even Yam is going to not only come, but also tell her mother she had the time of her life at Amal’s birthday party.”

But Yam never came. At six in the evening not even one guest arrived, and Amal’s mother began throwing pizza slices off the balcony. She threw the cake out the window and it landed on Yam’s mother’s Subaru, while she was driving to get chicken for dinner. The cake splashed like a chocolaty bomb, and Yam’s mother called the police and said she wouldn’t live in the same neighborhood with a woman who acts like a terrorist.

Amal didn’t see when they took her mother away. She closed herself in her mother’s bedroom and smelled the lilac on her mother’s pillow until the sounds of the ambulance and her mother’s helpless screams faded away. Amal didn’t even mind nobody coming to her tenth birthday party; it was only her mother she wanted to be with.

At seven, right before an aunt came to take Amal away, a white dove flew into the kitchen, where Amal was busy cleaning the rainbow sprinkles off the Persian rug.

“No, no,” the dove shrieked, flapping its shiny wings frantically before settling on the counter. “Most little girls do actually come from doves, but it is not usually something parents let their children know before they are in their teens.”

“All this time I thought my mom didn’t know what she was talking about,” Amal said, and tears began rolling on her freckled cheeks that were still stained with the chocolate her mother let her lick off the mixing spoon she used for baking.

“I guess my mom was also right when she said crazy was like lady-bugs crawling in the blood.”

“No, no, the dove/baby-girl theory was the only thing your mom got right,” the white dove explained to the crying girl with its all-knowing shrieks. “Crazy is not hereditary or anything like that. Your mom is just saying those odd things because she has gone coco’nutty after the war.”