In advance of their PEN Out Loud discussion on September 10 at The New School, we asked Rion Amilcar Scott (The World Doesn’t Require You, Liveright) and The New Yorker‘s Vinson Cunningham to recommend a playlist for the event and talk about why they’re excited to be in conversation. Don’t miss out! Buy tickets here » 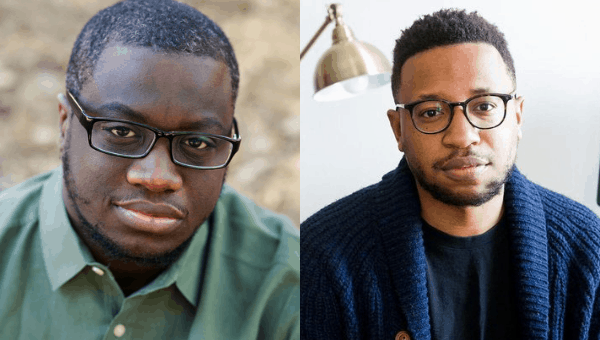 1. What do you want readers to know about your sophomore short story collection, The World Doesn’t Require You?
2pac labeled one of the songs on his final album the realest thing he ever wrote. That line flashed through my head a lot while I was assembling this book. In fact, it’s in the book.

2. What was the last book you read? What are you reading next?
The last book I read was the wonderful and revelatory White Flights by Jess Row. Next I plan to again dig into Toni Morrison’s Beloved.

3. Why do you think it is valuable for writers to be in conversation with each other about their work and current events through series like PEN Out Loud?
Books and their ideas gain so much more power when people come together to discuss them and think about them. It’s beautiful to hear another reader make a connection you’ve missed. We all have pieces of the picture, coming together makes more of the portrait.

4. What do you admire about Vinson Cunningham’s work as a writer? What are you looking forward to speaking with Vinson about in September?
I get excited when I see Vinson has published a new piece. His analysis is the type that helps me make connections that I didn’t know needed to be made. He seems to bring the whole of his intelligence to his work. I look forward to that type of insight when we speak. Readers have a way of showing writers things they didn’t know were in their work and Vinson has proved himself to be one of the best readers and thinkers working, so I am interested in learning from his engagement with my book.

5. What did receiving the PEN/Robert W. Bingham Prize for your debut collection Insurrections mean for your writing career?
Perhaps it would have taken me another year or two to finish The World Doesn’t Require You without the award. The PEN/Robert W. Bingham Prize gave me time to think and that time gave me much of the book, particularly the novella that ends the collection.

1. What do you want readers to know about your writing at The New Yorker?
Oy, I dunno. That it usually takes me a long time to do? More seriously: I have a pretty strong sense that something called the Truth does really exist, and that paying attention to things—books, artworks, social circumstances, personalities, the ways in which people move and speak—helps us to move, however incredibly slowly, in its direction. I hope all of my pieces do a bit of that work.

2. What was the last book you read? What are you reading next?
Like lots of people I know, I’ve been rushing through Sally Rooney’s two novels—Conversations with Friends and Normal People—over the past couple of weeks. Her stories offer so much pleasure, and make you so hungry, while reading, for the next juicy bit of plot, that it’s hard to stop and reflect, or to be remotely critical. I’m already looking forward to reading them again. I’ve also been moving very slowly through Ellen Bryant Voigt’s wonderful monograph The Art of Syntax as part of two of my ongoing projects: to learn more about how poetry works, and to refresh my sense of the sentence.

3. Why do you think it is valuable for writers to be in conversation with each other about their work and current events through series like PEN Out Loud?
As my first answer probably proves, writers can sometimes be willfully—and, in order to get the work done, maybe necessarily—naive about all the levels on which their work is working. Sitting down to talk about it can help to clarify these things, and, in the very best settings, serve as an extension of the processes of writing and reading themselves. Good talk creates new knowledge. There are few things more exciting than the feeling, during enjoyable dialogue, of improvising on the themes that a work of literature puts out.

4. What do you admire about Rion Amilcar Scott’s work as a writer? What are you looking forward to speaking with Rion about in September?
Rion’s work is so good, in so many ways, that it’s hard to answer a question like this. But what makes him most distinctive—at least to me—is how funny he manages, consistently, to be. Too much writing treats humor as an afterthought, or a side-effect, or a bonus; Rion uses it as a technology for rooting out even the most serious ideas. In a story like “The Electric Joy of Service”—which, in hands any less skillful, might come off as a mere set-piece—he establishes the gonzo facts of the world he’s creating, and then, like the best sketch comedians, takes his premises (namely, his robots) deeply seriously, illuminating every human impulse that crosses his field of vision along the way. The result of that rigorously comic effort left me howling—but also, I think, slightly smarter. I want to know just how he pulls this stuff off.

5. What does PEN America’s work defending freedom of expression mean to you?
Well . . . everything, really! What we do as writers (and, maybe even more importantly, as readers) depends on a pretty intricate—always delicate, never quite complete—edifice of democratic practice and civic expectation. Without PEN America, and organizations like it, we’d be lost.

Check Out the Playlist!

Memory and Modernity: A PEN Out Loud Reading List