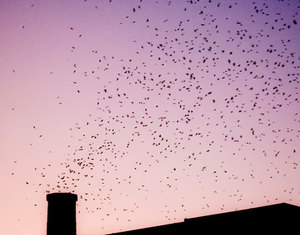 This week in the PEN Poetry Series, PEN America features a poem by Alex Dimitrov.

We’re good at keeping how we shouldn’t feel.
On the ferry to the island I burned alone that way.
At least, he thought, there’ll be an earth to sink in.
The last scenes in Shakespeare I forget to breathe.
When history caught up with us: no less cruel than our parents.
Wanted to tell you of the psychic witch who found my life with one eye
though we weren’t speaking then and here you’re dead.
I’ve put a period to end each thought that won’t end.
Come into my house (they were) and talk to me about another life.
The park is true and in perpetual August. Yes, I’m late
and going, going back there.
These small hopes. Traces. Spit on the sidewalk.
I’m an adult and feel less urgent every day.
No one’s number matters but the voices anchor;
and the coolness at the bottom of a memory
or how people stop to watch the moon together.
Finally knowing you, I know I cannot know you.
This body’s terrible at your religion.
And why eternal life if pleasure’s time-bound
and each new year’s a killing…
he said, the dead are one long summer.
Walking, going nowhere
and some punctuation in an emailed note
reminds me who I am more so than what I’ve written.
I would pause for you and be a million commas.
The way a flock of birds will leave a tree.
Not just the sound or lifting.
That’s where I want to put my hands inside you.
And I found it on a train, beside small pools,
passing mountains near the city dust
between the ribs or where the dusk waits.
I gave my life a real nice show.
And then you went away so I could see you
as graffiti in a bar just once.
A man is stepping on the moon.
The earth or your one life is gone.
The phone rings in your leaving.
Let your black hair, let your black hair
get in my way always.