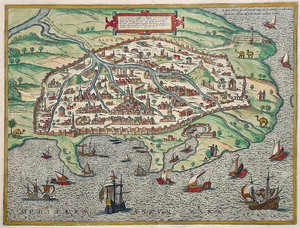 The Alexandria that Constantine Cavafy knew no longer exists. Nor does the Alexandria that E. M. Forster got to know during the First World War, nor the Alexandria that Lawrence Durrell lived in during the Second World War. Nor for that matter does the Alexandria I knew growing up in the late Fifties and early Sixties. These Alexandrias no longer exist. Something else lies on Egypt’s Mediterranean coastline today, but it’s not Alexandria. E. M. Forster, the author of the one and only guidebook to Alexandria, lost his way in the streets of Alexandria when he returned before writing the third preface to his guidebook. Durrell might never have gotten lost down some sinister lane, but he certainly wouldn’t recognize the Alexandria of the Quartet one bit—and for good reason: his Alexandria never really existed in the first place. As for me, I could still take a walk in Alexandria today and never get lost; but the character of Alexandria has so thoroughly changed in the decades I’ve been away that what I found there, when I finally went back, unhinged me completely. After a twenty-minute walk in downtown Alexandria, all I wanted was to head back to the airport and catch the first flight out. This was not the place I’d come looking for. Whatever this was, it was not Alexandria. Where todays’ Alexandria is headed is anyone’s guess, though I shudder to speculate, and certainly not in public.

Cavafy, the ultimate Alexandrian, gave us an Alexandria that disappears before our eyes. The apartment where he made love as a young man is an office now, and the days of 1896, of 1901, 1908, 1909, 1910, and 1911 are no more. Everyone knows that the Barbarians, like time itself, are at the gates and that everything will be swept in their wake. They may come now or in one or two centuries, or in one thousand years, but come they will, and more than once, while you are landlocked in the city, cannot leave and cannot tear out the city which is both your transitional home and the permanent demon you cannot drive out. You and the city are one and the same, and soon neither will exist.

As for the old Alexandria of Alexander the Great, of the Ptolemies, of the Septuagint, of Caesar and Cleopatra, of Theocritus, Callimachus, Apollonius, of Philo and of Plotinus, of Aristarchus and Eratosthenes, and of Clement and Origen, and, let’s not forget, of course, the Alexandria of the great library. Well, it perished many times over and, from the evidence available today, hardly even existed. Stones and shards and handwritten scraps. Their Alexandria, like Cavafy’s Alexandria or like mine, just happens to have been in Alexandria, and, by some fluke of luck, happens to be called Alexandria as well, and, coincidentally enough, some of its streets still run along the same lines that the founders of the city laid down more than 2000 years ago. But it is not Alexandria.

There have been many Alexandrias. Egyptian, Hellenistic, Roman, Byzantine, Ottoman. Most were totally pluralistic: multi-ethnic, multi-national, multi-religious, multi-lingual, multi everything, or in the unforgettable words of Lawrence Durrell in one of his more whimsical moments, a city of “five races, five fleets and more than five sexes”—a city which, when Napoleon landed in 1798, was no more than a meaningless fishing village of 6,000 inhabitants. In Durrell’s less forgiving formulation, Alexandria is a “moribund and spiritless backwater… a shabby little seaport built upon a sand reef.”

So what is Alexandria?

Yes it’s a place—but Rome is a place, Athens, Byzantium, Paris, Berlin, even Troy are places with literally several layers of history under each one. Alexandria, however, is something more than a place, more than an imbrication of tiers, more even than an idea, or a figure, or a metaphor.

Alexandria is an invention. It is totally man-made, artificial, the way St. Petersburg is entirely man-made and therefore unnatural. A man-made city does not sprout; it is pulled of sludge and shaken into existence. Because it is grafted it never feels secure in its place, never belongs. It is on borrowed time and the ground on which it’s built comes from borrowed landfills. Which is why, perhaps, it is splendiferous, exquisite, and extravagant: to forget its shaky ground; for nothing binds its people to earth. You cannot swear on the ground you stand on because the ground you stand on was never divinely ordained as yours. No one has convictions here, and oaths, like truth, are shifty business. Alexandria borrows belief systems and robs traditions from its neighbors, because it has none of its own to pass on, though it almost always perfects the things it adopts because it lives off reinvention. Under the Ptolemies it stole every book it could lay its hands on, the way it appropriated and then propitiated the knowledge it found in them. It borrowed nationalities, borrowed workers, borrowed legacies, borrowed languages, borrowed, borrowed, borrowed, but was never one thing in one place, which is why it is the only spot in the history of mankind that not only understands but that prescribes paradox in its charter. It won’t be shocked when church and brothel share the same roof, the way it knows that prophet and street hustler, priest and poet are not just easy bedfellows, they are one and the same person. Wealth, pleasure, intellect, and God, that’s what Alexandria adds up to, or in the words of Auden about Cavafy, “love, art, and politics.” How these three cohabit without tearing each other apart is explained by one word only: genius. And genius never lasts—like the library, which burned down many times over, like Hypatia who died of a thousand cuts. It never lasts, it cannot last.

Alexandria is unreal. You watch it disappear. You know it will. You wait for this. You anticipate the future and are reminded to remember the past when that day comes. There is no present tense in Alexandria. The covenants of time were always broken here. However you look at things, everything always already happened, will happen, might, could, should, may never happen. Totally counterfactual. The ancients called this the irrealis mood, part conditional, part subjunctive, part nothing. You fantasize the way you remember a might-have-been life that hasn’t really happened but isn’t unreal for not happening and might still happen though you fear it already has but really never could. When Cavafy steps into the room of his younger days he is neither here nor there. He watches the cast of the afternoon sun upon the bed and he already knows he already knew even back then that he’d think of this one moment many years hence.