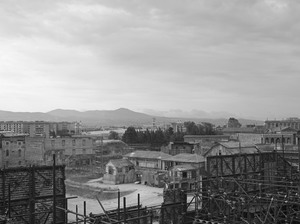 This week in the PEN Poetry Series, guest editor Robert Fernandez features a new poem by Alex Walton. About Walton’s work, Fernandez writes: “Awash in erudition and resource, black bile, melancholy, and Alexandrian syllabic charge, Alex Walton’s poem, ‘Alexander,’ is a romp, doggish, something in its teeth, mind and art both aligned and hooked together at cross purposes. It brings us its meal and lays it at our feet. And our feet get cold with history, purpose, and conquest, only so many worlds. But here we see something coming: ‘Sensible men fight only / Over water rights,’ our hemistiches tripping on boundaries circumscribing life waters, death waters, life and death waters. Bones. Let’s get real. These bones help us see. They cast last. Beyond the contemporary. Tiqqun. Skeleton key. Self and murder. Honest man. Other. Grey jello. And they ask, knowing the answer: What waits behind these forms? “

and Diogenes, Diogenes and Alex-
ander – “The Gordian need not be cut” but is
there such thing as half a knot to trust to lie where
through a stained glass window showing Alexander

who had been Diogenes: as inextric-, intractability’s
to give the other’s cavalry your fleas, your fleas
their flag. “Were I not Alexander, I would be
Diogenes” – as if to press his cheek on the

verso of a cold electrum tetradrachm,
conqueror permanently camped outside the self
conquering cheerful cynic’s wrong life jabbed lightly
THEY LAUGH AT ME / BUT I’M NOT LAUGHED AT and under-

cut the seven continents in saying so, a
boot-sole frozen in black bile abdicates Ant-
arctica to him THE WORLD IS MY ‘FOUNTAIN’
by Duchamp. I PISSED ON THE MAN WHO CALLED ME A

DOG. WHY WAS HE SURPRISED Alexander’s soothsay-
er was not soothing saying by the Ganges bank
“sensible men fight / only over water-rights” –
Atlantic, Pacific, Lethal, aquavit, spit

lending the truth its polish, but a brutal wit
if quick is at the earth’s own ends immediate-
ly, it does not have to fight its way, but can re-
join life with the living, death with the dying, make

the total total of philosophy seem just
a kind of travel-writing for the dead, a gloss
magazine left open on the lap of Madame
Recamier’s articulated coffin where

she spends the afterlife all afternoon on her
balcon. WHO HATH NOT SEEN THEE OFT AMID JSTOR
in life digressing to deflect pop death’s armor,
but is cynicism to be treated cynic-

ally? No one sees more clearly than the one-eyed
man who can wink without meaning to and mean it.
Lifetime reairs murders. An eloquent cuss out-
does in various compactilities the Swiss

Army Kant with transcendental toothpick picking
aporia, matte side of every piece of
glitter in the air EVER SEE AN INFINITE
ENTENDRE, PAL? where honesty’s a claplight to

applaud void truth appears to flicker touching fact
that WITH A LAMP IN BROAD DAYLIGHT an honest white
guy just looks truly jaundiced, for surely this in-
deed is Earth-on-Hell, Stratford-on-Analogy,

“one tip of the flame . . . piercing the living room floor”
nor am I out of it by more than ten percent
content recycled through the Heraclitean
Center for Anonymous Resources. But can

Tiqqun lead anonymous water to a known
horse, move a sword to tears and call it ethics? That
truth – the right concentration of brevity in
eternity, eternity in brevity –

is not Plato foreshadowed, not shadows foreshad-
owing shadow-shows, not gray jello that bores us
with its consistency, we think, “I am bored, bored
with this consistency, with this skeleton-key

that really opens nothing:” inconsistency’s
THE TRUTH IT ALSO AIN’T rainbow bracelet of bright
foam about the lips of THIS RABID SOCRATES
Heavier than the loaf is a crumb of WONDER

concept proof of morsel one can sleep through PLATO’S
ENDLESS CONVERSATION without having slept for-
ever, not having overslept. Wind stirs a trough
active with scum, a bucket overturns and is

Sam. Johnson’s to kick and prove. Ecce colloqi-
um: cold piss at dawn filling an unknowing cup
half empty DOGS BARK AT STRANGERS and Xenia,
unspayed mongrel with well-groomed fleas, knows not what a

stranger doesn’t look like. A REAL STRANGER’S STRANGER
lying naked in the snow outside, not cold, JUST
IMAGINE I AM ALL FACE that can hold his arms
fast and imprint no angel, this “Athenian

Thoreau” unstirred out of his suburb Cranium
where Alexander caught him up. Red-dyed-crescent-
plumed Macedonian George Washington standing
over our fair cynic, must one shoot, to know what

living is, ambrosia, once? For eternity,
extrapolable honey, if we must fight there
must be one who says “At least we will be fighting
in the shade” queued in eternum trying to sheath

a sword with a knot in it back into the dust
jacket of “How to Do &c.” All die, I’ll die
of breathing if I don’t die of holding someone
else’s breath, the downy vultures know; sunbathing

poor in Alexandrian authority offering
to do anything, give anything, it is right
looking up and OUT-OUTSQUINTING SUN say yes in
fact you may stand a little left, out of my light.