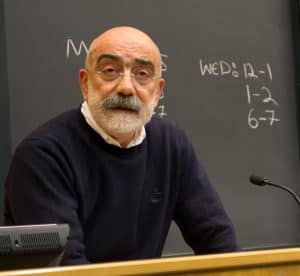 Ahmet Altan is a best-selling novelist, journalist, and founder of Taraf, a now defunct Turkish daily newspaper. In his role as editor-in-chief, Altan used Taraf to spotlight government corruption and the outsized role of the military in political affairs. In 2013, he was found guilty of defamation for an editorial criticizing President Erdoğan’s role in the Uludere Massacre of 34 Kurds crossing the border from Iraq, though his sentence was commuted in favor of a fine. Altan is also the author of ten novels, all bestsellers in Turkey, and seven books of essays.

On September 10, 2016, Ahmet Altan was arrested again, along with his brother Mehmet, for allegedly spreading subliminal messages on a television appearance the night before the July 16 attempted coup against Erdoğan. This was part of a widespread media purge in Turkey in which 131 media outlets were shuttered and 117 journalists were arrested, in an astonishing crackdown on free expression. Mehmet Altan was ultimately acquitted and released from detention in July 2019, but Ahmet Altan remains in prison, having now spent nearly three and a half years in Turkish custody. He was conditionally released last November, but the Turkish state swiftly sought to silence Altan, filing an appeal of the judge’s order and re-arresting him only eight days later.

“You can imprison me but you cannot keep me here. Because like all writers, I have magic.”
—Ahmet Altan, in his most recent book,
I Will Never See the World Again

In prison, Altan has become an advocate for the rights of the incarcerated.  In October 2019, he published his memoir I WIll Never See the World Again, a book intended to humanize those with him in prison, and he also has published his story in The Guardian.  True to his fearless roots, Altan continues to use his words to advocate for the freedom of others–no matter his own circumstance.

In their #PENOutLoud conversation, @MitchSJackson & @imaniperry talked about specific books and writers that connect to Mitchell S. Jackson's own work. Watch the full conversation here: https://youtu.be/EyizOw551qA.

On #thePENpod, we check in with @KarenAttiah, journalist & global opinions editor at @washingtonpost. She reflects on the intersecting political crises of #COVID19 and state-sanctioned violence, and urges us to turn the lens of criticism inward. LISTEN 🎧: https://bit.ly/2XrPO8m

"I think what a lot of us are feeling and saying—particularly Black women—it’s just the feeling of like, 'We warned y’all. We told y’all.'" @KarenAttiah on today's #thePENpod https://pen.org/the-pen-pod-karen-attiah/