Ahmed Naji: ”I thought the world was as fragile as a glass while it is as strong as water” 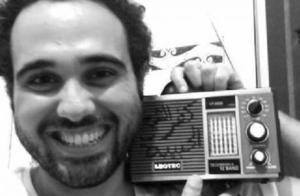 Egyptian novelist and 2016 PEN/Barbey Freedom to Write Award winner Ahmed Naji, who was charged with two years in prison for “violating public modesty” for his latest novel,  was freed on a suspended sentence earlier this week. On Friday, he published his first Facebook post since his release, expressing his gratitude to all who supported him throughout this difficult time. PEN America translated the post, initially written in Arabic.

After more than 300 days of isolation from the outside world and my dear internet, I am slowly trying to return back to understand what is happening in the world and render it in a way it can be understood. Hence, please excuse me for the delay in writing about it.

This was unbelievable, specifically for someone who is neither a social figure nor a cultural one. All what happened and is happening is a perpetual surprise and I need some longer time to completely absorb it.

I owe all these letters the energy that was the best support to pursue with cohesion and to find the capacity to practice the experience and exceed it.

I realize that this solidarity is not a personal issue but comes from individuals with interest in living in a healthy community with freedom of opinion and expression. And also from other individuals abroad who are fond of this universal values. I personally never suspected the size, the importance and how enthusiastic these people were to express and defend these values we cherish.

Thanks to those whom I didn’t know as they opened my eyes on a world I thought was as fragile as a glass while it is as strong as water.

Specially the lawyers team Mr Naser Amen, Nagad Elbory, Khaled Ali, Yasmin Hossam Eldin, Mahmood Othman, and all the team of The Association for Free Thinking and Expression. And also thanks to whom attended our conferences in Egypt and other Arabic nations. Thanks to the legal effort, patience and joint efforts I am now out of prison writing this article.

What surprised me was the power of politicians and Egyptian parliamentarians who have shown their commitment to the constitution supporting freedom of opinion and opposing unconstitutional laws constraining this freedom and imposing penalties on publishers. Days of jail with its bugs, its sweat, its pain and cold were not endurable fellow prisoners and especially the ones of dorm 4-2 and 1-2. And I hope one day the penitentiary laws will get more humane such a way the people wearing white will be less than the ones wearing blue.

To my fellow journalists and media people, thank you for your attention, follow up and coverage. I have health issues and familial obligation that we’ll hold me out of Cairo beside me losing my phone number. Thus, I want be able to respond to the requests for interview and official statements. Thank you for your understanding.

Finally, the case is still open and next Sunday there is a court of cassation. So we need your solidarity and your love until we pass this final step.