After the Cameras Leave, In Three Parts 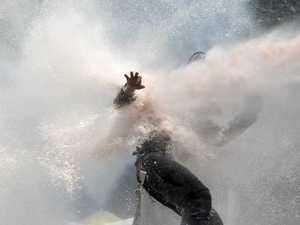 This week in the PEN Poetry Series, PEN America features a poem by Hanif Willis-Abdurraqib.

After the Cameras Leave, In Three Parts

I.  The Ghost Of The Author’s Mother Performs An Autopsy On The Freshly Hollow City

They listenin’ to the wrong music again, child. When the smoke rises and sinks its teeth into the meat of another dark sky, people always wanna act like “Mississippi Goddam” was the only song Nina Simone blessed the earth with. Probably ‘cuz if you sit on the floor with a record player in a room quiet as a dirt-lined casket, you can hear the black bones cracking right there underneath the piano keys. You can taste another man’s blood climbing slow up the back of your throat. Feel the water cannons start to press through the walls and soak your feet. Might even be able to see the one hundred snapped necks hanging from the edge of the needle when Nina sings “Lord have mercy on this land of mine…”

And if that don’t carry you to the front lines of any city trynna paint its streets with your blood, lord knows nothin’ will.

But didn’t nobody sing “Sinnerman” like Nina. Didn’t no one else cast that spell right. The confessional ain’t no good if nobody confessin’. Nina, though. Let every note of “Sinnerman” hunt for a wicked tongue. Forced it to lift its secrets to the warm air. You play that song over what’s left of any scorched city, and watch. All them white men gonna start runnin’ from they homes, crying the names of what haunts them  into their bloody palms. ‘Til the middle of the street splits wide open. Swallows them whole. I know. It  ain’t gonna bring nobody’s dead child back. But I ain’t seen “Mississippi Goddam” do nothin’ ‘cept flood a house of black bodies ‘til they washed up in the heat of a city, bloated and dying.

My daddy never taught me to swim.
I ain’t never take my babies to the water.

have they stopped / whispering the dead thing’s name yet? / I was promised / the brick’s heavy kiss / would spread me thin / over where they killed the boy / and then I would become the new / dead thing / to grow ripe in every mouth / I would become the thing they remember / in the summer / I show up to the party late / and loud / I drink the house into a desert / I keep the whole world thirsty / I stay after everyone else leaves / I keep you awake until the sun comes / I crumble the body / I leave the jagged void / I part the whole country / I Moses the Midwest / come children / walk through my toothed bed / to the other shore / we don’t talk about death over here / we don’t speak its name / we don’t name leaving / we wake up to a new day / we don’t think of who didn’t / look at my body / stretched out on this holy ground / like I’m almost human / like I’m almost worth grieving / and why not? / people have to mourn the shatter / of anything that they can / look into / and see how alive / they still are

III. What Is Left Of “Sinnerman”, After The Fire

Don’t you see
this