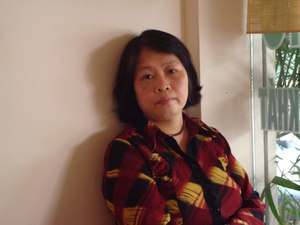 On June 22, 2011, Tran Khai Thanh Thuy, who was serving a three-and-a-half-year sentence at Labor Camp No. 5, Yên Dinh district, Thanh Hoa province, was abruptly released following immense international pressure. She was taken to Hanoi International Airport, and placed on a plane that would fly her into exile in the United States. She was forced to leave behind almost all of her personal items at the prison, including poetry written in detention, and was permitted less than 20 minutes to say good-bye to her husband, who remains in Hanoi. Thanh Thuy and her daughter arrived in San Francisco on Friday, June 24, 2011.

Tran Khai Thanh Thuy had been under heavy surveillance and harassment since September 2006 for her critical writings published online. She had repeatedly been denounced and humiliated in public meetings organized by the Vietnamese authorities, and her home was attacked by mobs who called her a traitor and a prostitute and threatened to beat her. The police refused to protect her, calling for her to abandon her activism to ensure her safety. In September and October 2006, she was repeatedly questioned and detained by the authorities and dismissed from her job.

On April 21, 2007, Tran Khai Thanh Thuy was arrested at her home in Hanoi, where she had reportedly been under strict house arrest since November 2006. She was believed to be charged with violating Article 88 of the Criminal Code for disseminating information considered harmful to the State by the authorities. She was also accused of being a member of Bloc 8406, a leading underground pro-democracy group, of supporting a dissident human rights organization and of illegally organizing a trade union, and could have faced up to 12 years in prison. She was held at Detention Camp B14, Thanh Liet, in district Thanh Tri, Hanoi until her trial commenced on January 31, 2008. She had been given only a day’s notice. Later that day, Thuy was sentenced to nine months in prison by a Hanoi court for “disturbing public order,” but was released later that day with time served.

On October 6, 2009, Tran Khai Thanh Thuy was detained while traveling to the northern port city of Haiphong to support six other activists, members of Bloc 8406, who were on trial for hanging pro-democracy banners and peacefully expressing their opinions on government policies through Internet essays and writings. After several hours of detention, reportedly incommunicado, she was released but was forbidden to leave her home. At 8:30 p.m. that evening, a group of men suspected of being plainclothes police officers reportedly attacked Thuy and her husband, Do Ba Tan, at their home. Tran Khai Thanh Thuy was hit with bricks and suffered an injury to the top of her head. Police officers stationed outside the house did not intervene. After being taken to the hospital, the couple was arrested, taken to the police station in Dong Da district, Hanoi, and charged with assault.

On February 5, 2010, a Hanoi court sentenced Tran Khai Thanh Thuy to three and a half years in prison and 47 months of probationary detention for assault under Article 104 of the Penal Code. Thuy was removed during the trial, which lasted less than a day, after she expressed protests.

Her husband, Do Ba Tan, was convicted of the same charges and handed a two-year suspended sentence and 47 months of probation, but has been permitted to stay home to care for the couple’s 13-year-old daughter.

On August 5, 2010, a fellow inmate named Cuc beat Tran Khai Thanh Thuy in Labor Camp No. 5, Yên Dinh district, Thanh Hoa province, where they were being detained. Cuc reportedly threatened Thanh Thuy two days prior. Thanh Thuy reported the threats to camp authorities, but these warnings went unheeded and she was attacked without intervention by camp guards. Cuc reportedly hit Thanh Thuy on her chest, abdomen, and genitals, which has left lasting pain and discomfort. Cuc claimed that she had been ordered to attack Thanh Thuy at the behest of the camp’s surveillance cadre, and that other inmates were intimidated from assisting her after the attack. Than Thuy suffers from diabetes and tuberculosis, and there were serious concerns that her health was deteriorating in prison.

Voice from Beyond the Grave