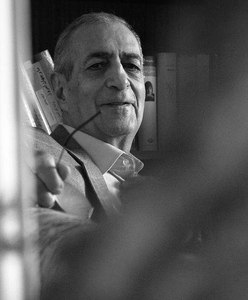 Siamak Pourzand passed away on April 29, 2011. Pourzand died falling from the sixth-story balcony of his apartment in Tehran. There have been conflicting reports as to whether he jumped intentionally, or was pushed. According to reports, after Pourzand’s death, state security forces continued to harass and threaten his family.

Siamak Pourzand was a journalist and film critic. He was the manager of the Majmue-ye Farrhangi-ye Honari-ye Tehran, a cultural center for writers, artists, and intellectuals. In later years, Pourzand was also a cultural commentator for several reformist newspapers that have since been shut down. He is well known for his articles critical of the Islamic regime, and is said to have been working with foreign-based Farsi language media prior to his detention. Pourzand was the husband of writer, human rights lawyer, and editor of the now-banned Zan literary review Mehrangiz Kar. Kar, also an Honorary Member of PEN American Center, was sentenced to four years’ imprisonment for her participation in an academic and cultural conference held at the Heinrich Böll Institute in Berlin on April 7-9, 2000 entitled “Iran after the elections,” at which political and social reform in Iran were publicly debated.

Siamak Pourzand went missing on November 24, 2001, it was later learned that he was being held incommunicado by the Iranian intelligence. The journalist had reportedly stated to friends and family that he had been followed by motorcycles and one or two cars in the two weeks before he disappeared. On March 6, 2002, Iranian authorities began closed and unannounced proceedings against Pourzand. On May 3, 2002, the Tehran Press Court reportedly sentenced him to 11 years in prison on charges of “undermining state security through his links with monarchists and counter-revolutionaries.” It is widely believed that the charges against him are based on confessions that were exacted under duress during the months he was held in incommunicado detention. Iranian authorities have offered no explanation of the charges or case against him to date.

PEN received reports indicating that he may have suffered one or more heart attacks while in incommunicado detention, and that he was not allowed access to adequate and necessary medical attention. After a series of hospitalizations in 2004, Pourzand was released on medical leave from prison. However, according to his family he was denied permission to travel abroad for necessary medical treatment and to visit his family who was living in exile. His sentence was due to expire on November 23, 2012.

In April 2013, The Siamak Pourzand Foundation was launched in the memory of Pourzand, dedicated to promoting freedom of expression for artists, writers, journalists and creative minds in contexts where the censorship apparatus is at work. On August 28, 2019, Maryland-based human rights law firm Herichi & Associates announced their representation of Pourzand’s wife and daughter in their separate claims against Iran’s Supreme Leader Ali Khamenei, Foreign Minister Javad Zarif and the Islamic Revolutionary Guard Force “alleging the torture, hostage-taking, and extrajudicial killing” of Pourzand, “who was allegedly subject to torture, solitary confinement, forced confession, and lack of medical care that led to his death in 2011.”