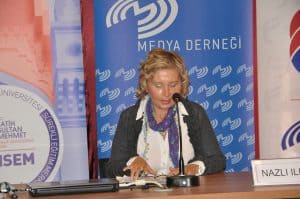 Nazli Ilicak, a 72-year-old veteran journalist, former member of parliament, and avid supporter of democracy, was arrested as part of a crackdown following an attempted coup in July 2016. She has been in prison since September 2016 and has faced several criminal cases as a result of her writings and expression, the most notable of which was a charge of attempting to overthrow the constitutional order through force and violence, for which she was sentenced to life in prison in February 2018.

On July 5, 2019, the Supreme Court of Appeals 16th Penal Chamber cleared Ilicak of charges related to violating the constitution, overturning her life sentence. However, the court rejected Ilicak’s request for release as other charges against her have not yet been dropped, with the court ruling that she was aware of the coup’s planning and had supported the Gulenist movement. On November 4, 2019, A Turkish court sentenced Nazli Ilicak to nearly nine years in prison, but ordered her provisional release for having served more than three years in prison. Ilicak is currently put under judicial control, a condition that forces her to regularly report to a local police station.

One of the most prominent journalists in Turkey, Ilıcak studied at the Ecole de Sciences Sociales et Politiques, Lausanne, Switzerland. She was the editor-in-chief in one of the leading newspapers of the time, Tercüman. In 1988, she became the publisher of Bulvar, the second newspaper owned by the Tercüman group. Between 1992 and 1994, she produced the TV show Söz Meclisten İçeri on TRT (the Turkish National Broadcaster). Besides Tercüman, she has also written for Meydan, Hürriyet, Akşam, Yeni Şafak, Dünden Bugüne Tercüman, Bugün, Takvim and Sabah newspapers. In 2014, she lost her job at Sabah due to her dissenting views on corruption allegations against some government officials. In response, she vowed to continue speaking out over Twitter and through other independent channels. “I have 500,000 followers,” she said. “That’s more than Sabah’s circulation.” She then started to write for Bugün but she was fired after a trustee was assigned to the newspaper in October 2015. She then founded the newspaper Özgür Düşünce, which was shut down on July 27, 2016, pursuant to one of the emergency decrees issued after the coup attempt.

Besides her journalistic career, she also took various positions in politics. She was elected to parliament as part of the Virtue Party in 1999 but the party was dissolved following a decision of the Turkish Constitutional Court, as the party was found to become a center of activities contrary to the principle of secularism. As a consequence of the dissolution of the party, Ilıcak lost her seat and was disqualified from becoming the founding member, officer, or auditor of another political party for five years. However, the European Court of Human Rights found her disqualification to be a violation of her right to freedom of expression, specifically her right to vote and to stand for election. She was an AK Party parliamentary candidate for 2011 general elections but she was not elected.

On July 25, 2016, arrest warrants were put out for 42 Turkish journalists for their suspected affiliation with the Gülenist movement, the name given to the large network of people affiliated with the US-based Islamic cleric Fethullah Gülen, a spiritual leader sometimes described as Turkey’s second most powerful man. The movement once ran schools in Turkey and all around the world, owned large media outlets and companies, and many of its followers held strategic positions in Turkish judiciary, police enforcement, and the government. The ruling Justice and Development Party (AKP) accuses the Gülenist movement of being responsible for the failed coup on July 15, 2016. As a result, the Istanbul Chief Public Prosecutor’s Office Bureau of Terrorism and Organized Crime issued the arrest warrants, and Ilicak was detained in September 2016. She has faced several civil and criminal charges since, including defamation, espionage and “attempting to overthrow the constitutional order.” On February 16, 2018 during the final court hearing Nazli IIicak and five other defendants were found guilty of attempting to overthrow the constitutional order through the use of force and violence​. The journalists were sentenced to prison for life.

November 4, 2019: A Turkish court sentences Nazli Ilicak to nearly nine years in prison, but ordered her provisional release for having served more than three years in prison. Ilicak is currently put under judicial control, a condition that forces her to regularly report to a local police station.

July 5, 2019: The Supreme Court of Appeals 16th penal chamber overturns the life sentence for Nazlı Ilıcak. However, charges against her are not dropped—with the court ruling that she was aware of the coup’s planning and had supported the Gulenist movement—and the court rejects her request for release.

January 22, 2019: The Istanbul 26th High Criminal Court sentences Ilıcak to 5 years and 10 months in prison in a separate case where she was charged with “sharing information that needed to remain secret for the security of the state.” She was convicted for an article titled “Military Intelligence and Tahşiyeciler” published on January 2, 2015, in Bugün, a newspaper allegedly close to Gulenist movement that was later shut down by the government. According to the court, in her article, Ilıcak unlawfully revealed confidential intelligence information on the close links between a radical jihadist group and the al-Qaeda terrorist organization.

January 8, 2019: The Office of the General Prosecutor of the Supreme Court of Appeal submits its opinion to the relevant chamber of the Supreme Court of Appeal, demanding that the lower court’s decision upholding life sentences for Nazlı Ilıcak, Ahmet Altan, and Mehmet Altan be remanded. The Office finds the charge for which the defendants were convicted of, “attempting to overthrow the constitutional order,” inapplicable, and recommends that they should re-sit trial for the charge of “aiding a terrorist organization without being its member.” The latter charge is punishable by one to three years in prison, unlike the former, which has a life sentence. The opinion of the general prosecutor is not binding in itself; it is submitted to the 16th Criminal Chamber of the Supreme Court of Appeal, which will decide on the appeal. If the chamber rejects the application of the defendants, the Office of the General Prosecutor can still object to the court’s decision.

December 26, 2018: The Istanbul Anatolia 53rd Criminal Court of First Instance sentences Ilıcak to one year and two months in prison for defaming Recep Tayyip Erdoğan in a Twitter post. The tweet in question was posted on February 2016 and is as following, “Is Selahattin Demirtaş a murderer? This type of thinking stuck Turkey in a deadlock, it is RTE (Recep Tayyip Erdoğan) who is in dialogue with the real murderer Öcalan” (not an official translation).

October 17, 2018: The Istanbul Regional Court of Justice 2nd Criminal Chamber upholds aggravated life sentences for 6 accused, including journalists Mehmet Altan, Ahmet Altan, and Nazlı Ilıcak. They were charged with “attempting to eliminate the Constitutional order.” In its decision, the court mentioned, among others, a talk show in which suspects gave speeches that indicate the “inevitability of the coup” and the articles they wrote, in which they “legitimized the coup” and “hinted at the activities of the terror organization.”

February 16, 2018: During the final hearing, the 26th High Criminal Court in Istanbul hands the heaviest penalty possible to Nazlı Ilıcak and five other defendants including Ahmet and Mehmet Altan, on charges of “trying to abolish the constitutional order of the Republic of Turkey by resorting to the use of force and violence.” Ilıcak, the Altan brothers, and three other defendants are found guilty and are sentenced to prison for life.  The panel of judges decides against any good conduct abatement for any defendants found guilty.

June 19, 2017: IIicak and the Altans’ trial begins. Altogether 17 defendants have been grouped together in this trial, 11 of whom have fled the country. The other six, including Ilicak and the Altan brothers, remain in detention while the trial is ongoing. If convicted, they face life sentences.

April 17, 2017: The prosecution officially indicts Ilicak, as well as Ahmet and his younger brother Mehmet Altan.

September 2016: Ahmet and Mehmet Altan and Nazli Ilicak are detained as part of a wave of arrests of thinkers and writers following the failed July 2016 coup attempt. They are arrested for allegedly giving “subliminal messages” to announce the coup on a television round table discussion show hosted by Ilicak, the Altan brothers and Ilicak are charged with attempting to overthrow the “constitutional order,” “interfering with the work of the national assembly,” and “interfering with the work of the government” through violence or force.

July 25, 2016: Arrest warrants are issued for Nazli IIicak along with 42 other Turkish journalists for their suspected affiliation with the Gülenist movement.

Following the coup attempt on July 15, 2016, and the imposition of a state of emergency, over 180 news outlets have been shut down under laws passed by presidential decree. There are now at least 148 writers, journalists, and media workers in prison, making Turkey the country with the highest number of imprisoned journalists in the world. PEN America has campaigned on behalf of a number of those writers incarcerated or otherwise facing restrictions on their freedom of expression or movement, including the Altan brothers, Ahmet Sik, and Zehra Doğan.

Unjust Sentences of Ahmet and Mehmet Altan, Nazli Ilicak, a Blow to What Remains of Free Expression in Turkey